Toyota kept the 87th running of the Le Mans 24 Hours under lock and key heading into the fifth hour of the race, with the factory hybrids running just under a minute apart. 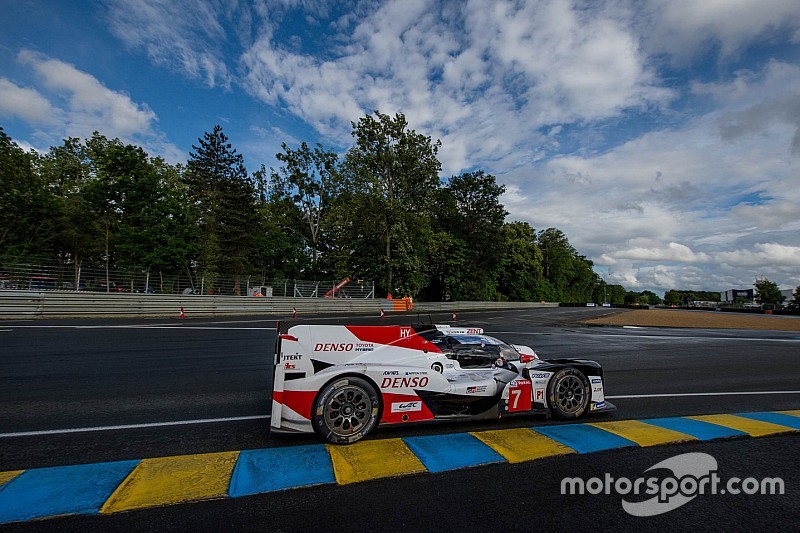 The #7 Toyota TS050 of Kamui Kobayashi lead the sister car of Fernando Alonso by 55 seconds after four hours of racing at the Circuit de la Sarthe.

Conway had led the way early doors in the #7 Toyota, building up a 40-second gap over teammate Sebastien Buemi in the #8 car.

Rebellion took control of the fight for third thanks to rapid pace from Gustavo Menezes in the #3 R-13, while the #1 car hit trouble early on. SMP Racing's two BR Engineering BR1s followed in fourth and fifth.

ByKolles went two laps down, partly because the door of the ENSO CLM P1/01 became unstuck. The DragonSpeed BR1 fell down the order after spending several minutes in the garage.

The third hour heralded the first driver changes in the top class with polesitter Kobayashi taking over from Conway and Alonso taking the helm of the #8.

Alonso lost a further 15 seconds to Kobayashi before Toyota changed the nose on the Spaniard’s car in a bid to improve the aero balance, but stayed two minutes clear of the privateer competition.

Stoffel Vandoorne made his Le Mans race debut in the #11 SMP Racing BR1 as he attempted to claw back the gap to Nathanael Berton in the #3 Rebellion.

In the fight for third the Belgian was making inroads on Berthon, who couldn’t match Menezes’ searing pace in the Rebellion, and narrowed the gap to eight seconds at the four-hour mark.

Egor Orudzhev also edged closer to the #1 Rebellion in the rear-gunning #17 SMP, a further 20 seconds back.

In LMP2, Signatech's leading #36 Alpine of Nicolas Lapierre was being hounded by Jean-Eric Vergne in the #26 G-Drive Oreca until the Frenchman handed over the controls to Dutch rookie Job van Uitert.

The 20-year-old immediately made his mark by overtaking the experienced Frenchman.

At the next pitstop van Uitert had to take a 10-second penalty because had Vergne violated the second full course yellow procedure in the previous stint.

That afforded Pierre Thiriet, who took over the Signatech car, some breathing room but van Uitert quickly closed the gap and re-passed the Alpine-branded Oreca one stint later.

After a scintillating opening drive by Giedo van der Garde, Racing Team Nederland’s Nyck de Vries caught a puncture shortly before the three-hour mark in his #29 Dallara, dropping the Dutch team well down the order.

That initially promoted the #31 DragonSpeed to third after opening efforts by Anthony Davidson and Ricardo Gonzalez, but both Jackie Chan DC Racing Orecas managed to make their way past.

Just before the four-hour mark DragonSpeed’s Pastor Maldonado retook fourth from the #37’s David Heinemeier Hansson. Paul di Resta manned the leading non-Oreca in sixth at the wheel of the #22 United Autosports Ligier.

The hotly anticipated 'battle of the decade' in GTE Pro certainly delivered during the opening four hours of the race. The #63 Corvette and the #93 Porsche managed to build a narrow gap over the field, while the fight picked up behind between the #67 Ford, the championship-leading #92 Porsche and its #91 sister car and the pair of AF Corse Ferraris.

Positions three through eight were generally covered by just a handful of second in the first two hours of the race.

James Calado went on the attack in the #51 Ferrari, picking off the Porsches of Michael Christensen and Richard Lietz in quick succession in the third hour. The Briton soon swept past the #67 Ford GT of Jonathan Bomarito to claim third in class.

Pilet’s #93 Porsche was shuffled back into the chasing pack due to a 10-second penalty for not respecting a full course yellow, meaning Magnussen was left out in front alone in the #63 Corvette ahead of Calado and Bomarito.

The latter was the next car to be delayed after being slapped with a drive-through penalty for an unsafe release.

At the four-hour mark the #63 Corvette remained out in front with Mike Rockenfeller taking over at the wheel. The #93 Porsche of Earl Bamber briefly appeared in second, having yet to make a fifth stop. Daniel Serra was a net second in the #51 Ferrari followed by Laurens Vanthoor's #92 Porsche.

The #77 Dempsey-Proton Porsche controlled the race in GTE Am with first Matt Campbell and then Julian Andlauer after the #88 sister car dropped out of contention in the first hour.

The defending GTE Am champions pieced together a 50-second lead over their nearest opposition.

Jeroen Bleekemolen charged to second place in the #85 Keating Motorsports Ford while the #90 TF Sport Aston moved past the #62 WeatherTech Racing Ferrari for third.

The #54 Spirit of Race Ferrari, which had been running up front early on, dropped down the order as Giancarlo Fisichella handed over the keys to Thomas Flohr.