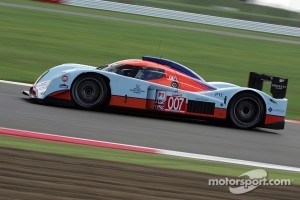 Zhuhai, 8 November 2011. Aston Martin Racing’s 2011 season will draw to a close at the Six Hours of Zhuhai on Sunday 13 November. Having achieved two consecutive podium finishes in the run-up to China’s Intercontinental Le Mans Cup qualifier, the team has high hopes of rounding off a successful second half of the season.

At the final round of the Intercontinental Le Mans Cup, drivers Andy Meyrick (GBR), Stefan Mücke (D) and Harold Primat (CH) will guide the DBR1-2 around the 2.68-mile Zhuhai International Circuit with ambitions of competing at the very front of the unofficial petrol category and challenging the diesel cars once again.

Aston Martin Racing Team Principal, George Howard-Chappell, said: “Firstly, I’d like to welcome Andy Meyrick back to the LMP1 team this year. Let’s hope we can continue our run of good results.

“We have not run an LMP1 car at Zhuhai before but with the test day on Wednesday, we have a chance to catch up on our competitors who raced here last year and find a good set up for the circuit.”

Andy Meyrick, stepping back into the LMP1 racer after a stint in an Aston Martin GT4 car, said: “I’m really looking forward to being back in the prototype and driving with Stefan and Harold. It will be my first time in China and, from what I’ve seen and heard, the circuit looks like it will encourage good racing.

“Hopefully we’ll be able to give Aston Martin a strong result at the end of the season to build on what was achieved at Laguna Seca and Petit Le Mans.”

Aston Martin Racing will continue to compete internationally in 2012 with the same hunger for success; confirmation of next season’s progamme will follow in due course.

The marque will also be represented in the LM GTE AM category by Gulf AMR Middle East’s Vantage GT2, with the team hoping to build on its fourth-placed class finish at Road Atlanta.

The 007 DBR1-2 will first run at competitive speeds during the pre-race test sessions on Wednesday 9 November, with two Free Practice sessions running on Friday 11 November. Following a third Free Practice period on Saturday 12 November, qualifying for the race will commence at 14.50 local time. The race itself starts at 11.00 on Sunday 13 November and will run for six hours.