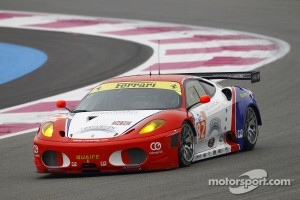 CRS is racing on home ground this weekend for the ‘Autosport 6 Hours of Silverstone’. This is the fifth round of the Intercontinental Le Mans Cup and the fourth round of the Le Mans Series. With 50 cars on the entry list it looks set to be another classic sportscar race at Silverstone’s famous Grand Prix Circuit.

The No.62 CRS Ferrari has had a last minute substitution as Shaun Lynn has business commitments this weekend. Jumping into the hot seat is a man who is no stranger to CRS: Tim Mullen. Tim will join regular drivers Pierre Ehret and Roger Wills who are out for a shot at the podium this weekend.

The No.82 CRS Ferrari 430 competes in the Le Mans Series, in the hands of Klaas Hummel, Phil Quaife and Adam Christodoulou. They’ve had more than their share of bad luck so far this season and, as Adam explains, they are also gunning for a podium finish this weekend.

“We fully expect to take a podium finish at Silverstone,” said Adam. “We were right up there in the first three races but for one reason or another we didn’t get the results we wanted. There’s no reason why we can’t be right up there again this weekend and I think we can make it stick. Yes, we’ve had a little bad luck but I think it’s time for our luck to change. All three of us know the track very well and I would like to think we can do well on home soil. Since the Imola round we have all been out racing different cars, including the McLaren GT car. All this extra experience and extra track time will help us when we get behind the wheel of the Ferrari this weekend.”