The two Peugeot 908s dominated qualifying at Zhuhai, with a fifth pole position of the season taken by Anthony Davidson (Peugeot no.7), ahead of Stéphane Sarrazin (Peugeot no.8). Just like last year, both Team Peugeot Total cars will start from the front row, for a six-hour race that once again looks set to be very closely contested, with the top four cars separated by less than a second.

This great front row is a good result for Peugeot

Team Peugeot Total has been working hard at the Zhuhai track since Wednesday to prepare for this, the season’s final race, and also to validate the most recent technical upgrades affecting, among others, the engine, transmission and suspension.

Anthony Davidson took advantage of the sessions to get his first look at the Chinese track, whereas Sébastien Bourdais, Stéphane Sarrazin and Franck Montagny are old hands here. After a first, rain-affected session, all the others were run in dry conditions and both Peugeot 908s were impressive in hogging the top two positions in each of the three free practice sessions.

The weather was sunny and warm when Anthony Davidson and Stéphane Sarrazin took to the track for qualifying. Stéphane Sarrazin set the time to beat with a 1’21.844 to take provisional pole position, ahead of his team-mate. With his final flying lap, Anthony Davidson bettered his time. With a lap timed at 1’21.769, the British driver secured his fourth pole position in a Peugeot by just 75 thousandths. The six-hour race is expected to be very hotly disputed, as has been the case all season. Sébastien Bourdais and Franck Montagny will start the race from the front row, ahead of the two Audis.


Bruno Famin, Peugeot Sport’s Technical Director: “We decided to go out right at the start of the session, given our position in the pit lane. We had no problems with traffic and that led to a great battle between the two Peugeot 908s. This great front row is a good result for Peugeot, but we mustn’t forget the Audis are right there. Indeed, our rivals set some very good average times during their stints in free practice. It will very close and bitterly-fought race. Strategy will be important, especially as regards tyre choice. This is a track that we actually don’t know all that well, as this is only our second race here. We’ll have to react quickly and be ready for any eventuality. The other satisfying aspect relates to the technical side of things. We had no problems during free practice, not even on the brakes which caused us quite a few problems last year in race conditions, but we’ll have to monitor the situation in the race.” 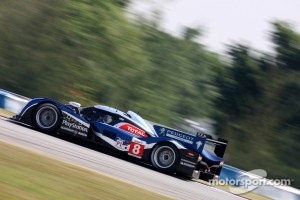 Anthony Davidson, Peugeot 908 no.7: “This is my third qualifying session in a Peugeot this season, and this is my third pole. It was really very close today, because Stéphane Sarrazin did a great lap. I had to push really hard to better his time. We have been on the pace right since we got here. The battle has been intense since the start of the year, so I see no reason why it won’t be the same tomorrow.”

Stéphane Sarrazin, Peugeot 908 no.8: “The session was very close. We had a good scrap. I did a super lap and the car was great. There was nothing in it for pole position – Anthony was only seven tenths quicker than me. We are confident for tomorrow because we did some very good race simulations during free practice. The car is stable and efficient. The start will be very hotly contested; the Audis are right behind us and are certain to apply plenty of pressure. Like at Petit Le Mans, we’ll have to avoid making any mistakes in the race.”

BMW committed to World Superbike “for the long haul”

BMW committed to World Superbike “for the long haul”