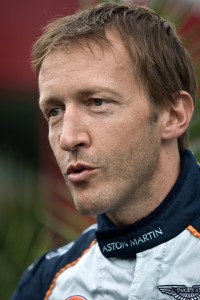 Aston Martin Racing driver Harold Primat heads to Silverstone this weekend for the fifth round of the Intercontinental Le Mans Cup: the Autosport 6 Hours of Silverstone.

Primat, along with fellow Aston Martin Racing drivers; 2009 American Le Mans Series winner Adrian Fernandez and ex-Formula One driver Christian Klien, will be returning to the British track with the V12 powered DBR 1-2 LMP1 race car. The car will run in the iconic blue and orange livery of Gulf Oil with the famed start number ‘007’.

Swiss racing driver Primat has had previous success at Silverstone including in 2009 for the Silverstone 1000kms where he recorded a fourth place finish.

Ahead of the race meeting, Primat has been focusing on his training which included taking part in the Monaco Tristar triathlon on September 4th. The prestigious race attracted a number of other well known faces including Formula One racing driver Bruno Senna, and fellow Le Mans Series drivers Tom Kristensen and Alex Wurz. Primat paired up with cyclist Antoine Bulzomi for the race and finished 13th out of 71 teams.

“I am really looking forward to being back in the car and racing at Silverstone again, it is one of the best circuits in the world. I’ve been busy training over the summer including taking part in two triathlons which have been great for maintaining my fitness levels. I also had the opportunity to do a training camp with the World Champion of Free Ride Jet Skiing; Pierre Maixen, which was a brilliant experience;” commented Harold Primat.

“It is great to be racing with Adrian and Christian again. I enjoy competing with them as we all get on really well and the three of us will be working hard as a team to deliver the best possible result for Aston Martin Racing and the fans;” continued Primat.

George Howard-Chappell, Team Principal for Aston Martin Racing said: “I am really looking forward to returning to Silverstone with the DBR 1-2 and aiming to compete with the other petrol cars on the grid. We intend to put on a fantastic show for all our fans.”

Qualifying for the Autosport 6 Hours of Silverstone starts at 13:35 on Saturday 10 September with the race commencing at 11:35 on Sunday.