The Final Act In China

The 2011 season of the Intercontinental Le Mans Cup will draw to a close in China, at the Zhuhai racetrack. On the back of a second consecutive ILMC* title, secured after an almighty scrap in early October in the USA, Team Peugeot Total has one remaining goal: claim a sixth race win of the season in the home of the world’s biggest automotive market.

A sixth win to conclude the season

2011 will go down in the annals of Endurance racing as one of the most closely contested years of racing. From Sebring to Road Atlanta, taking in Spa-Francorchamps, Imola, Silverstone and of course the 24 Hours of Le Mans, every race has been decided by a few tenths of a second, sometimes thousandths, between Peugeot and its most tenacious rival. After six incredibly close races, Peugeot secured the manufacturers’ title* thanks to five race wins, including three one-two finishes and four pole positions.

At Zhuhai, the first racetrack to be built in China in 1996, the race may be just as difficult to call. Finishing the season with another win appears to be essential, on this technical track where the drivers’ nerves will be sorely tested as overtaking can prove to be complicated. China, a great stage for the season finale

We are the champions, but that doesn’t stop us from wanting to win again in China.

“We are the champions, but that doesn’t stop us from wanting to win again in China”, emphasized Olivier Quesnel, Peugeot Sport Director. “We want to head into this 6 Hours of Zhuhai in relaxed mood, so we can grab another win, which will be one of the most sought-after of the season, given the high stakes in China as the world’s biggest automotive market. Our win here last year helped to promote Peugeot’s brand image and raise its profile in China. We are therefore aiming to do just as well this year, in order to demonstrate Peugeot’s know-how and technological prowess. There was next to nothing in it in 2010 and the odds are that it will be much the same this year”.

Preparations for Zhuhai and 2012

Since winning at Road Atlanta-Petit Le Mans, Team Peugeot Total has not been resting on its laurels! “We have completed two major test sessions”, stressed Bruno Famin, Peugeot Sport’s Technical Director. “The aim was twofold: on the one hand, make progress on developments for 2012 and on the other hand, prepare for the 6 Hours of Zhuhai. For example, we worked on a strategy to protest the transmission, which failed to work on cold tyres at Petit Le Mans, resulting in the retirement of the no.7 car. We also fine-tuned the mechanical set-up. Zhuhai is a specific track which is particularly demanding on the brakes. Last year, we won by just four seconds after we had major problems in this area. This year, with the cars even closer together – every race has been decided on a minor detail – we will have to be absolutely perfect at all levels to prevail.”

”The 908s will feature a few relatively minor technical upgrades to the suspension, the steering and the brakes, and more significant changes to the engine”, continued Bruno Famin. “We will be running both our cars during Wednesday’s free practice day, after which we will decide which upgrades to keep for the race”. 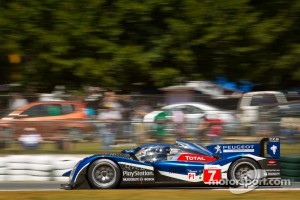 Nicolas Minassian will also be in China as the team’s reserve driver.

The 6 Hours of Zhuhai on Peugeot China and Peugeot Sport’s Web TV, in three languages

In an initiative driven by Peugeot China, the entire Zhuhai race will be broadcast live on Peugeot’s Web TV in three languages: in French, English and, for the first time ever, in Chinese. Coverage will include behind-thescenes footage, pit stops and onboard camera action: all means available will be used to take you inside the team, to the heart of the racing action. In partnership with Tudou and Dailymotion, coverage starts on Sunday at 10.30am in China at www.peugeot.com.cn and at 3.30am in France for the French and English versions at www.peugeot-sport.com.

On display at the Shanghai motor show, the Peugeot 908 HYbrid4 – symbol of Peugeot’s leadership in Diesel Hybrid technology – which completed its first track outing a few weeks ago, will also be making an appearance at the seventh round of the ILMC. First of all in Guangzhou, accompanied by Franck Montagny. And then at the Zhuhai racetrack throughout the race week. Finally, the day after the race, the 908 HYbrid4 and Stéphane Sarrazin will head for Shanghai again, this time to Peugeot China’s head office. 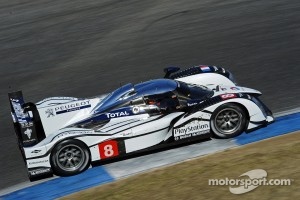 With sales reaching 8.6 million vehicles in the first three quarters of 2011, China is the world’s biggest automotive market. The market has experienced sustained growth, at around 8.8%. Driven by the successful release of several new models in recent months, Peugeot’s sales in China have increased very significantly over the same period, growing at double the market rate, at +17%.

Between January and September, close to 125,000 Peugeot vehicles (locally manufactured and imported products) have been sold in China. This represents a new record for the brand, which has been operating in China since 2004.

In under a year, Peugeot has released four new vehicles in China: imported models 3008 and RCZ and the locally manufactured 508 and the brand new 308 saloon. Since its release in July 2011, 508 – Peugeot’s first model from the D segment to be marketed in China – has made a very promising start with over 8,000 orders already placed. 508 tops Peugeot’s range of locally manufactured vehicles, which also features 207 in hatch and saloon versions, 307, 308 saloon and 408.

The Peugeot network has some 380 sales outlets spread throughout China, including 243 dealerships.

Series concludes at 6 Hours of Zhuhai