Stage Set In England For Act 5… 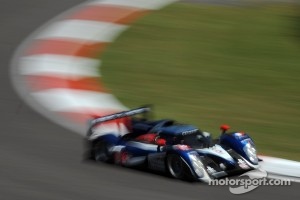 The Intercontinental Le Mans Cup may have had a two-month summer break, but Team Peugeot Total has not been resting on its laurels. Since completing a one-two in the 6 Hours of Imola on July 3, the team has conducted a series of development test sessions. The two Peugeot 908s entered for the race at Silverstone will be aiming to extend the team’s lead in the overall standings. 6 hours that can be followed live on Peugeot's WebTV.

The title in Peugeot’s sights

The ILMC gets back underway at Silverstone, with a six-hour race which is once again set to be contested like a sprint, like all of the races that have been held this season. Peugeot, who have not had any retirements so far this season, have won three races and hold a 43- point lead over their direct rival as the championship moves into this, its fifth round.

“Our goal is to win a second Manufacturers’ title in ILMC”, explained Olivier Quesnel, Peugeot Sport Director. To do that, we really must make sure we get both cars to the end of the race. Just one retirement could open the door to our rivals again. Since the start of the season, our new car has demonstrated exemplary consistency and reliability. The Sebring, Spa, Le Mans and Imola rounds all went by in a flash in the first half of the season. We have therefore taken advantage of these last few racing-free weeks to work in depth on the car development, not only with the second half of the season in mind, but also looking ahead to 2012.”

In a country with a true love of motorsport, Peugeot hopes to add to its large collection of race wins, the final European leg of the season with its two 908s.

- Three drivers line-up in the Peugeot 908 No.7 (blue rear-view mirrors), which won the 6 Hours of Imola: Sébastien Bourdais, Anthony Davidson and Simon Pagenaud. Simon will act as a back-up to the usual driver pairing, as Anthony Davidson is unsure of making a full recovery in time to do himself justice, having broken his collarbone in a bike accident in early August. Anthony hopes to be able to take part in his home race, which is important to him, especially since he won here brilliantly with Nicolas Minassian last year.

- The Peugeot 908 No.8 (white rear-view mirrors) will be driven by its usual pairing of Franck Montagny and Stéphane Sarrazin, as they go in search of their first win of the season.

In spite of the holiday period, there has been constant activity at Peugeot Sport as, amongst other things, we conducted five test sessions at Barcelona, Paul Ricard HTTT, Aragón and on PSA’s test tracks. These last two months have given us an opportunity to carry out some in-depth work on the cars. At the start of the season, with a new car, we clearly defined our priority: reliability. We therefore came to Le Mans with a reliable car, but one which was still in the early stages of its development. This summer, we have done a lot of work fine-tuning the set-up and taken a swathe of measurements on the Peugeot 908s, especially during straight-line speed tests. The goal is to improve our fundamental understanding of the car. We had scheduled this work before the 24 Hours of Le Mans, but it wasn’t possible due to the two accidents we had during winter testing.

The Silverstone race sees some changes to the technical regulations. How do they affect the Peugeot 908s?

We are applying the two measures that the FIA and the ACO made mandatory on September 1st, aimed at minimizing the risk of prototypes flipping over. The first of these concerns an increase to the opening of the front wing shutters. It has little effect here on our cars because at Silverstone we will be racing with fairly open shutters due to the level of downforce. The second measure has a much more significant impact: it involves increasing the thickness of the undertray plank (or skid block) by 5mm (it is now 25mm thick). This forces us to raise the ride height by the same amount, which means altering the mechanical and aerodynamic setup of our cars.

In addition to the revised thickness, the plank will now be checked at the end of qualifying and at the end of the race (which wasn't previously the case). It is therefore sensible to allow a margin of error to be sure of not dropping below the minimum threshold, to take account of wear and any damage caused as the cars cross the track’s rumble strips. This isn‘t going to be easy, especially as this year the race is six hours long, which – in dry conditions – equates to close to 20% more distance than the usual 1,000km.

What is your state of mind ahead of the 6 Hours of Silverstone?

We are really looking forward to it because we are keen to return to competitive action, but also because it is always interesting to measure your progress against your rivals after a long period of development like the one we are currently going through. And, of course, last year our main rival made a huge step forward in the UK. We’ll see what this year has in store. Based on what we have seen in previous races, I think we can safely assume we are in for another very closely contested race, with plenty of excitement.

As has been the case since Spa-Francorchamps, the entire Silverstone race will be shown live on Peugeot Sport’s Web TV. Footage from behind the scenes, pit stops, onboard camera, the race itself and the realtime positions of the two Peugeots will be available with commentary in French and in English, starting at 10.35am, Sunday 11 September. Just go to: www.peugeot-sport.com

6 Hours of Silverstone next stop for Le Mans Series