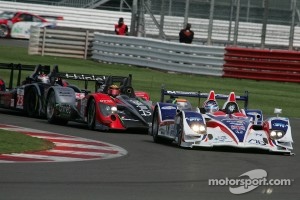 The RML AD Group HPD ARX-01d will line up eighth in LMP2 for tomorrow’s Silverstone 6 Hours after being one of several teams to be caught out by changeable conditions during Saturday’s qualifying period.

The day’s weather varied between bright sunshine and heavy showers, all accompanied by blustery winds. The twenty-minute qualifying session managed to combine the whole spectrum, but early signs were that the rain would predominate. Eager to get a banker in the bag, the team sent Tommy out with the first group onto the track, and the Brazilian was a close fifth in P2, behind the four cost-capped Orecas. With the rain intensifying, it looked unlikely that times would improve, and Tommy returned to the pitlane. When the rain eased during the closing minutes, encouraged by high winds, a dry line developed that allowed those who’d braved a later start to exploit the improving conditions.

“I can’t deny I’m a little disappointed by the final outcome,” admitted Phil Barker, the Team manager at RML. “We had the option to go early and put in a time, or gamble on the weather and wait. We elected to go early. The way the track dried out unexpectedly in the last four minutes suggests that we might have been better off waiting. At the end of the day, we’re a couple of rows back at the start of a six hour race, and in the grand scheme of things, it really makes little difference.”

Thomas Erdos was equally philosophical. “I wanted to get out there straight away, in case the rain really hammered it down. I started to push a little, and that allowed me to determine where the best grip was, but then the rain came down even heavier. I’d only done three laps, but it was then too slippy to consider anything quicker. We looked at the times other people were setting, and decided to come back in. We couldn’t have predicted that it was going to dry out so much at the end. With hindsight, perhaps we could have refuelled and gone out again, but it’s very easy to say that now.”

It was as if there were two different sessions; those that started out at the beginning, and those that finished it off.” suggested Pauline Norstrom, Director of Motorsport and Marketing at AD Group. “Those in the first group ended up within a whisker of one another, and then the last group leapfrogged to the front. Under the circumstances, we’re happy to be starting from 8th. It’s certainly not a problem, and it provides a secure platform for the start. All three drivers report that the car is very balanced, and ideally set-up for the race, and we will see tomorrow how things develop over the full six hours.”

The forecast for the race is for more rain. Tommy Erdos will take the rolling start and the first driver stints in the #36 HPD. “The conditions tomorrow could be completely different again,” he said. “If it does rain, I won’t mind. As long as I can see where I’m going, I’ll be happy.” Tommy will then hand over to his co-drivers; Mike Newton, CEO of AD Group, and Ben Collins.

The race, which is the penultimate round in the 2011 Le Mans Series, will start at 11:35. The start and finish will be broadcast on Eurosport, while there are plans to stream the full six hours live on www.lemans.org

Peugeot takes third pole of the season at Silverstone