Series concludes at 6 Hours of Zhuhai

The Zhuhai 6 Hours: A dream final! 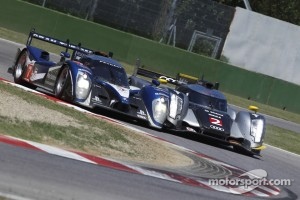 The effervescence is building up at the Zhuhai International Circuit. On Sunday, the Chinese track will host the final round of the 2011 Intercontinental Le Mans Cup. A prestigious victory in the biggest car market in the world and the battle for the title in LM GTE are what’s at stake in the 2011 Zhuhai 6 Hours.

Just one race to go and Peugeot will be crowned 2011 ILMC manufacturers’ and teams’ champion. Mathematically speaking these two titles cannot escape the French make no matter what the result of its main rival, Audi, on Sunday at the end of the Zhuhai 6 Hours. But this race whets the appetite of the major manufacturers like almost no other: for them victory in China, now the biggest car market in the world, is of capital economic importance.

Nonetheless, neither Peugeot nor Audi, which have both entered two cars, can afford to trip up as the other entries in LM P1, Aston Martin , OAK Racing and Rebellion Racing, three teams ending their season on a high note are ready to take full advantage of any slip-ups of the part of the French and German cars.

Since Aston Martin’s return in September with its V12-engined prototype in a Lola chassis from the previous years, the British manufacturer has met with considerable success including victory at Laguna Seca (in the American Le Mans Series) followed by third place overall in the Petit Le Mans. Rebellion Racing won the Le Mans Series manufacturers’ title with its Lola-Toyota as well as scoring a telling fourth place overall at Silverstone. OAK Racing’s third and fifth places at Silverstone followed by fourth and seventh in the Petit Le Mans show the qualities of the Sarthe-based team after an unlucky start to the season. “We’ve all got great memories of this circuit,” smiles Jacques Nicolet, the OAK Racing boss who has entered three cars, two LM P1s and an LM P2, for the Chinese event. “In 2010 we finished on the topmost step of the podium in LM P2 and we clinched our ILMC title (in LM P2). It bodes well for the final round!” In addition, it is worth noting the exceptional presence of a Japanese Courage-Oreca LC70 entered by Tokai University.

Beyond the vital economic battle that will also rage in GTE, the Zhuhai 6 Hours will prove decisive for the attribution of the manufacturers’ and teams’ titles in LM GTE Pro. BMW is still in with a small chance of beating the leader, Ferrari. The German make has no choice but to go for victory as this season it has scored only one win, the Sebring 12 Hours, compared to its Italian rival’s five successes. Finishing on the podium, which BMW has done since the start of the championship, will not be enough unless it’s on the topmost steps! In the manufacturers’ classification Ferrari has a 28-point lead over its German rival, and in the teams’ ratings, AF Corse is only 14 points in front of BMW Motorsport.

In LM GTE Am on the other hand, the Larbre Competition Corvette will not be under any pressure as Jack Leconte’s squad clinched the 2011 LM GTE Am Teams’ title at the Petit Le Mans. Corvette works driver Olivier Beretta will join the French team for this round, and will share the car with regulars Patrick Bornhauser and Julien Canal. The same applies to Signatech-Nissan, which also won the LM P2 championship title at Road Atlanta: its sole adversary will be the OAK Racing OAK Pescarolo.

At the end of the Zhuhai 6 Hours the curtain will fall on the Intercontinental Le Mans Cup. In 2012, this series created in 2010 which has relaunched the concept of the international endurance challenge in sparkling fashion, will be replaced by the FIA World Endurance Championship, a much more detailed presentation of which will be given to the press in Zhuhai on Saturday 12th November at 12h30.