Jeannette and Montecalvo to start fourth at Le Mans

Le Mans, France – June 16, 2012 – Racing against the best sports car drivers in the world, young American racers Gunnar Jeannette and Frankie Montecavlo will start fourth in class for the start of today’s 24 Hours of Le Mans. 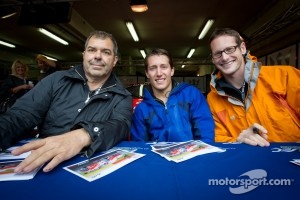 During the final qualifying session of the weekend on Thursday, Jeannette lapped the 8.5-mile (13.6 kilometer) circuit with a time of 3:58.800, which placed the No. 58 Luxury Racing Ferrari fourth and the highest qualified Ferrari in the GTE-AM field.

Jeannette is scheduled to be the first driver in the cockpit for Luxury Racing. Co-driver Pierre Ehret is second and Montecalvo takes the wheel as the third driver in the rotation. The team estimates each driver will run ‘double stints’ during the opening segment of the race, which is approximately a two-and-a-half hour segment.

For live timing and scoring from the 24 Hours of Le Mans, visit www.fiawec.com or the official Le Mans website at www.lemans.org/en/ Race day coverage will be available starting at 8:30 a.m. ET on SPEED.

For the latest information on the 24 Hours of Le Mans and the 2012 World Endurance Champions series, visit www.fiawec.comor www.lemans.org.

Gunnar Jeannette
“Qualifying went really well. Our Ferrari is pretty good in race trim. We qualified fourth which was good. I had a little bit of traffic on my lap, so I think we could have been a little bit faster, maybe second. Most importantly the Ferrari is very good for race. I’m looking forward to having a strong start and hopefully a strong race.

“I’m very excited to get out and race on Saturday. I’m looking forward to get up on the podium with Frankie and Pierre.”

Frankie Montecalvo
“We qualified fourth in class. I also believe we are first in the WEC cars in our class, so that is pretty cool. Our Ferrari is strong and we’re ready. The team appears to have identified and solved the brake issue. So we’re just looking forward to the race.

“On Friday we did the Drivers Parade which was very, very cool. There were a bunch of old cars that we got to ride around in through the city. We gave out hero cards to huge crowds of fans. It rained on our parade but it was great to see everyone come out to see all the drivers. It was definitely a nice experience. I’m glad I had the opportunity to participate in the Drivers Parade.”