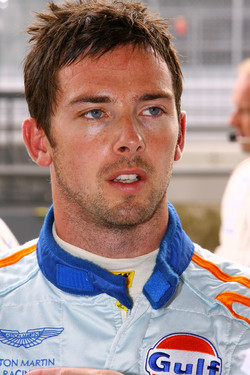 London-based Buncombe, who drove for the official Aston Martin Racing factory team in 2009 aboard the stunning Gulf-liveried LMP1, had his first taste of the car yesterday in a brief shakedown, and will now travel with the team to Le Mans this weekend for Sunday's official test day.

Chris Buncombe: "I'm really pleased and excited to be joining Jota Sport AMR for my return to Le Mans and to be able to continue my association with the Aston Martin brand. It will be my first time back at the race since winning the LMP2 Class in the 24 Hours in 2007 so I have many happy memories there! It's also great to be driving with Sam and Simon, I'm sure we will make a great team."

It will be my first time back at the race since winning the LMP2 Class in the 24 Hours in 2007.

Sam Hignett, Team Principal and Co-owner: "We're thrilled that Chris is joining us. Le Mans is such a challenging race that having a proven winner who knows how to get the car to the flag will be a tremendous help. We've all known one another for quite some time now as well which should allow Chris to slot pretty effortlessly into the team. He's got a slightly tough break with his first proper test of the car being at Le Mans this weekend, so we'll not be expecting too much of him, but thereafter I've no doubt he'll be a great addition to the ranks."

Following the test this weekend, the team head to Spa for Round 2 of the Le Mans Series on 7th May, before heading back to Le Mans for the start of "Le Vingte Quatre Heures" on 11th June.

Lorenzo: “I am faster than Rossi and I can still win the title”