The event’s official Test Day is the only opportunity drivers and teams have to experience the particular demands of Le Mans’ part-public road, part purpose-built track outside of race week, making data acquisition the priority for everyone. 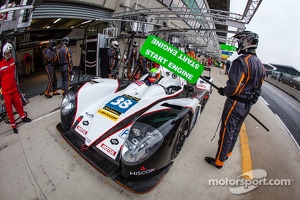 Fortunately drivers Simon Dolan, Oliver Turvey and Lucas Luhr spent plenty of time behind the wheel as the team concentrated on evaluating and honing the new aero package that its Zytek-Nissan LMP2 prototype will use in the race.

The ELMS regulars ultimately ended the day seventh fastest in class having concluded their programme early. An impressive lap from Dolan had been good enough for third before the team’s rivals ran qualifying simulations at the end of the day.

Le Mans’ typically fickle weather also played its part throughout the test, offering Jota Sport an opportunity to try set-ups in a variety of conditions that will almost certainly appear at some stage during race week.

While both Luhr and Dolan have experience of racing prototypes at La Sarthe, 2013 will be Vodafone McLaren-Mercedes Formula 1 Test Driver Turvey’s first appearance there. Despite his wealth of success in other forms of racing he, like all Le Mans rookies, was required to complete a minimum 10 laps of the circuit.

Oliver Turvey: “It was an amazing experience to drive my first laps of Le Mans! The circuit is quite unique with its mix of racetrack, a lot of public road and very high speeds, so it is a great challenge. The conditions were quite changeable all day, which made testing difficult, but we were able to get through most of our programme. They also meant I could get a feel for the car with different levels of grip, which I am sure will be beneficial during the race. I can't wait to make my Le Mans 24 Hours debut next week.”

Simon Dolan: “I was really pleased to have had the chance to drive in wet, mixed and dry conditions; it’s really valuable experience for the race. It was also great to have been quick in all three of those circumstances and as always the team and car performed flawlessly. I can’t wait to get back over there and do it again in the race.”

Lucas Luhr: “The test went well. There was rain in the morning, which allowed us to try wet tyres and also the intermediates. The car handled really well and we were able to gather a lot of very good data. Then, in the afternoon when the track dried, Simon did a good amount of running and we were also able to try set-ups in the better conditions.

Overall I am pleased with the way the team is working and it’s great how focused they are on the race. I think we have the pace required and the car is working well, so I’m looking forward to Le Mans and hope we can have a good result there.”

The week-long build up to Le Mans starts with the first day of scrutineering on Sunday 15 June ahead of practice and qualifying sessions. The race itself begins at 3pm local time the following Saturday.

A good Le Mans test day for Panciatici and Alpine