Jota Sport, Dolan and Turvey return to their regular European Le Mans Series commitments at the Red Bull Ring in Austria on July 19/20.

Jota Sport played a starring role in this year’s Le Mans 24 Hours (June 22/23) before suspension failure put paid to their chances of claiming LMP2 class victory. Just finishing the gruelling French classic can be considered a major achievement in itself, however. 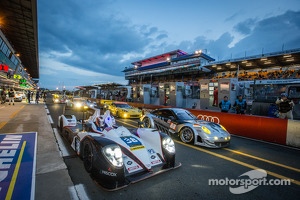 Sadly the first of these, coming just 10 minutes after the start, was for an accident involving Danish driver Allan Simonsen who, despite the best efforts of the circuit’s medical staff, succumbed to his injuries shortly after. All at Jota wish to extend their sincere condolences to Allan’s family and his Aston Martin Racing team.

When racing resumed an hour after the incident Vodafone McLaren-Mercedes Formula 1 Test Driver Turvey wasted no time in demonstrating his ability behind the wheel by moving from sixth to third during the opening triple stint.

Pit strategy saw co-driver Luhr return to the fray in sixth before he dropped two places with a half spin when battling for position. The German more than made amends however with a blistering triple stint of his own as he clawed his way back into the top three.

Dolan then maintained his team-mates’ pace, closing down the second-placed car throughout an impressive triple stint, before Turvey climbed aboard again for his first competitive experience of Le Mans under darkness. The Briton built upon Dolan’s good work by further reducing the gap to second spot, and soon became engaged in a thrilling three-way battle that saw the leading trio trade P1.

Luhr returned to the car shortly after 3.30am and picked up where Turvey left off by swapping the lead with Jota’s class-leading rivals. Displaying the incredible pace amongst heavy traffic that makes him one of the most revered endurance drivers on the planet, the German continued to dispute top spot until around 7am on Sunday morning.

It was here that Jota’s race took a turn for the worse as the car suffered a front suspension failure. Unfortunately this occurred at the Dunlop Chicane, forcing Luhr to navigate almost the entire 13.6km circuit at severely reduced speed. This, coupled with the subsequent 20 minutes it took to fix the problem, ended the team’s chances of mounting a victory challenge over the race’s final third.

With Jota now focussed on finishing the event Turvey climbed back aboard for a further quadruple stint before handing over to Luhr once more. Dolan was thus charged with bringing the car home, but this would prove a significant challenge of its own as torrential rain hit the race during the final hour.

However Dolan displayed awesome car control to master the treacherous conditions, proving to be one of the few LMP2 runners who returned to the pits on slick tyres without suffering an off-track excursion. This would help the team gain further ground on their way to an eighth place finish that, although not their ultimate goal, was still a satisfying result in the world’s greatest endurance race.

Simon Dolan: “It’s cool to finish but I can’t help feeling disappointed as I think we had the pace to win. You need a bit of luck when it matters and we didn’t really get that. I’m personally pleased with the way I drove and the team as ever worked incredibly hard. It was just the suspension failure in the morning that did for us really. But there’s always next year.”

Oliver Turvey: “It was an amazing experience to compete at Le Mans for the first time and I’ve got to thank Jota Sport for the opportunity. We had good pace and were fighting in the top three going into the night. I was pleased with my stints and was consistently one of the quickest out there in LMP2 without making any mistakes.

The intermittent rain made conditions very tricky around such a long lap but I was able to deal with them fairly well. Obviously the final result wasn’t what we had hoped for as we were definitely in the mix for a podium. But overall it’s been an amazing week.”

Lucas Luhr: “We were a little bit unlucky and lost some time with how the safety car periods worked out. Then there was the suspension failure that saw us lose more time limping around the lap and fixing the issue. But that’s Le Mans: it’s never over until three o’clock on Sunday afternoon.”

Sam Hignett, Team Principal: “It’s always a special achievement to finish at Le Mans, so I’m delighted for the guys who have worked so hard. We had a lot of luck in the second half of the race but none over the first half when we needed it. The suspension component that failed put us back the ten laps we eventually finished behind the class winners, which is a great shame.

But we’ll come back stronger and wiser next year. It was also a fantastic effort from all three of our drivers who didn’t put a foot wrong between them.”

Jota Sport, Dolan and Turvey return to their regular European Le Mans Series commitments at the Red Bull Ring in Austria on July 19/20.