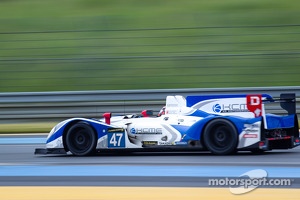 During the first half of the test, the drivers were set to complete the mandatory 10 laps in wet conditions to officially qualify for the race. Notably, KCMG’s Le Mans debut this month sets a milestone in motorsport history with the team becoming the first Chinese outfit to be granted entry in the prestigious Le Mans 24 Hours.

Chinese driver Ho-Pin Tung was first to complete the compulsory laps in KCMG’s blue and white #47 Morgan-Nissan LMP2 on the historic 13.62km track. Tung got off to a strong start and set fastest laps before wrapping up his morning stint. Next up to smoothly deliver the required laps was British driver Matt Howson.

Halfway through the first session, lead KCMG driver Alexandre Imperatori’s first run was interrupted by a red flag due to Audi driver Loic Duval’s crash at Tertre Rouge. Nonetheless, the Swiss driver completed his mandatory 10 laps, cementing his eligibility to contest the race.

The second four-hour session resumed in the afternoon amidst wet track conditions. This time the team’s objective was to complete as many laps as possible and better familiarize the drivers with the complex Le Mans track that is composed of both permanent racing surface and closed public roads. The team also focused on race simulations but did not complete any low fuel qualifying simulations.

Tung started off on wet tyres and ended his second stint after completing 13 laps. His British team-mate took over the LMP2, but as track conditions changed the drying circuit required Howson to switch from wet to slick tyres on Lap 21. Howson was able to complete 12 laps in his second stint that afternoon.

Imperatori had a moderate start due to multiple red flags caused by incidents involving other drivers on the arduous track. But true to form, the Swiss driver’s superb driving moved the team up to higher positions by Lap 29. Tung wrapped up the final session and finished in 11th place in the LMP2 class. Cumulatively, the drivers completed a total of 44 laps during the Test Day’s second half.

Ho-Pin Tung: “The weather conditions were quite tricky in the morning but we managed to do our compulsory laps without any troubles. In the afternoon the track dried up and we all got some dry laps in. We still have some work to do but everything was running very smoothly and we were competitive immediately in both wet and dry conditions. A great debut for KCMG and all of us at Le Mans.”

Matt Howson: “The first running at Le Mans for KCMG went absolutely to plan, with all drivers completing the minimum laps necessary to start the race, and plenty of lapping in wet, drying and dry conditions, all of which are very likely during the 24 hour race!

The circuit is unlike anything I've driven, and largely involves 300km/h on public roads so an incredible sensation, and you definitely have no idea what it’s like until you've done it.

We have several more hours of testing next week to refine our race setup, but all is looking good for a strong debut race. A big thanks to the whole team for working long hours to keep the car running!”

Alexandre Imperatori: “Some difficult conditions for our Le Mans debut with mixed conditions but the team did a good, solid job and we ticked all the boxes. Most importantly, all drivers did their mandatory 10 laps and there were no problems with the car.

Now we must tackle the learning curve as quick as possible and get the car just how we want it for the race. We have a good base and good team behind us so I'm confident we can get there very quickly.”

Paul Ip, KCMG Team Owner: “The official test has produced promising results and we have successfully completed the necessary laps which make us eligible to participate in the Le Mans 24 Hours. The entire team did a good job over the weekend and we still have time to work on improvements.

After months of detailed planning and laborious preparations, we are finally making history here at Le Mans and we now focus on qualifying day which is less than two weeks away.”