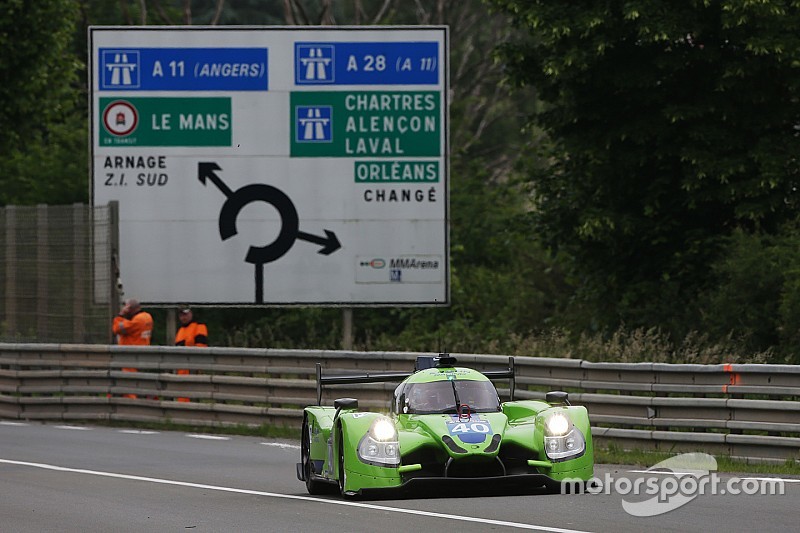 A successful program was completed and the team heads into the race in a quietly confident mood that they are ready for any eventuality.

Krohn Racing lines up on the grid this weekend for their eleventh participation in the Le Mans 24 Hours. Nic Jönsson’s best lap of 3:45.213 was posted early in the first session of Qualifying. The subsequent Qualifying sessions were conducted in the most challenging of conditions with monsoon-like storms battering the French circuit at regular intervals.

In common with the rest of the field, Krohn Racing’s plans for concentrating on a qualifying lap time had to be put on hold and the team’s focus switched to optimizing the car for the classic 24 Hour race. The weather allowed the team to work closely with Michelin, to prepare for any circumstances that might arise in the race. A successful program was completed and the team heads into the race in a quietly confident mood that they are ready for any eventuality.

Team Owner Tracy W. Krohn will continue his partnership with long-time ally, Nic Jönsson, extending their continuous driver-pairing record at Le Mans to eleven races. They are joined once again by their third driver from the 2015 race, João Barbosa.

Tracy W. Krohn, Krohn Racing Team Owner/Driver: “During the Practice and Qualifying sessions we didn’t quite have the car that we wanted but at least we came away with a car that we can race with. The rain has been an interesting factor for us, I got to stay out one lap too long on the intermediate tires. I discovered it was too wet and spun on the Mulsanne Straight, a couple of 360’s out there, but no real damage. The car was ready in time for the final Qualifying session so it wasn’t an issue. The team has really worked hard to get everything put together this week. We are very proud of Krohn Racing and Greaves Motorsport and I look forward to a very successful race.”

Nic Jönsson, driver Krohn Racing: “Unfortunately I really haven’t had much of a chance to qualify, we have gone through a number of different issues both Wednesday and Thursday. With the rain we haven’t had a chance to try and put a time in. The guys did a great job and we have the car back to where it was at the Test. So we have a car that we can race and a secure car to race, maybe it is not the fastest car but it is going to be consistent and that really counts in a 24 hour race. Once again the combination of Krohn Racing and Greaves Motorsport crews have done a phenomenal job here during the past few days and I am just looking forward to seeing the Tricolour on Saturday afternoon, then hopefully we can have a good, consistent, safe race.”

João Barbosa, driver Krohn Racing: “It is really hard to predict what is going to happen in the race. We didn’t have the smoothest of Practice and Qualifying. The weather conditions did not help either, but I think we made solid improvements during the time that we had on track. I am just looking forward to starting the race and moving forward. Our focus was not on Qualifying and we are a little further back than we expected; but I am sure we will have a good race.”

Jeff Glover, Team Manager Krohn Racing: “We are excited to be here again. We have had a few challenges from the weather in Qualifying and there could be some more issues weather-wise in the race. We are ready for whatever this place throws at us. Michelin tires work well in wet or dry conditions, so we are well prepared in that area. We’ve seen snow at Silverstone, and we’ve seen these conditions before here and at Fuji, so we’re ready to go and are looking forward to it.”

Lee Penn, Race Engineer Krohn Racing: “Well, Practice and Qualifying were relatively disappointing.We had some issues with the car but we have been able to get on top of those and improve things a lot. Judging by Nic’s pace during the first dry running; things are good and we have the race pace to be competitive. We are looking forward to the race.”