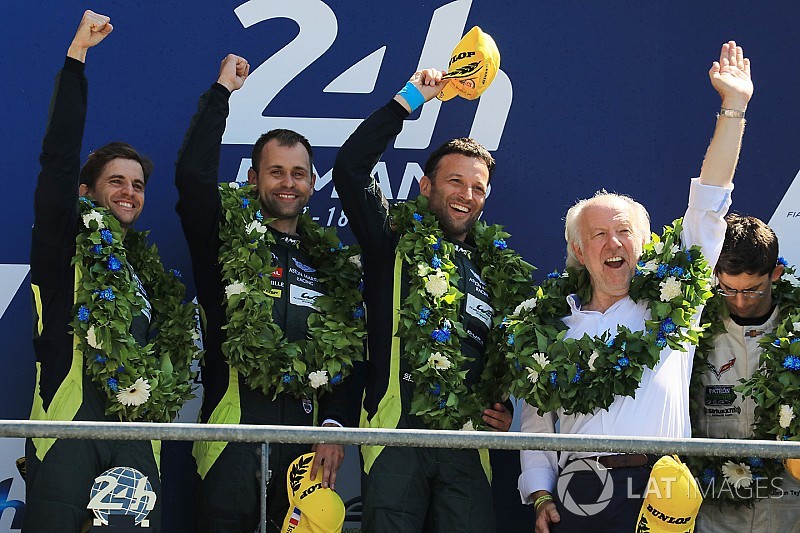 Aston Martin Racing boss David Richards said the last-lap decider of the GTE-Pro battle was always going to be “do or die” between his driver Jonathan Adam and Corvette Racing’s Jordan Taylor.

In the most thrilling of finishes to a 24-hour race, Adam passed erstwhile leader Taylor on the exit of the Ford chicane starting the last lap – after they had earlier made contact at Arnage.

“It was just one of the most extraordinary races from start to finish.”

Adam – who shared the #97 Vantage with Darren Turner and Daniel Serra – went on to claim a famous win as the Corvette slumped to third, behind the first of the Ford GTs, with a punctured tyre.

“The Corvette was good all the way through that last stint and at one point he [Taylor] had a good seven or eight car lengths gap,” said Adam.

“At the [final] pitstop, we nearly got the overlap but he got away in front, and the words on the radio were, ‘OK, this is for Le Mans, if you want to win it you’ve got to get by.’

“He had a strong pace but the one area I thought he looked weak on was the run to Indianapolis and down to Arnage. So when I got on to the back of him again, I knew I couldn’t not have an opportunity. When it arose I had to take it there and then.

“There was a small bit of contact on the way out of the corner and again the gap rose, but he had a big lock-up down the Mulsanne, into the second chicane, and then after that he was braking a lot earlier in some places.

“Then at the final corner I could see his left-front tyre seem to start delaminating, and the key then was to be patient, wait until the exit, and get him there. But it was weird to go across the line because everybody was ready for the final lap and it was quite a cool feeling.

“But I knew I had to get that because we’d waited 24 hours for it. I had to take that opportunity when it arose.

“I think we all had a battle at some point with the Corvette and we were quite evenly matched. The key thing was to hunt them down and try to force that mistake - and Jordan unfortunately made that mistake.

“They’ll always be a strong car and they had really good race pace this weekend. The racing across all the manufacturers was fair, but close and hard-fought, and we as professionals love that.

“If you’re door-to-door with friends or rivals, then so long as it’s clean, it’s great for spectators.”