Culmination of five years of development occurs at Le Mans

It’s easy to forget that Le Mans truly can be fun. Working the event from a team, driver, manufacturer or media standpoint, the anxiety can overwhelm at times, and the pressure of success drives everyone involved to the edge. Grueling doesn’t begin to describe it.

No question then, that seeing the refreshing childish enthusiasm from one of the smallest teams competing here, Robertson Racing, is a welcome breath of fresh air. 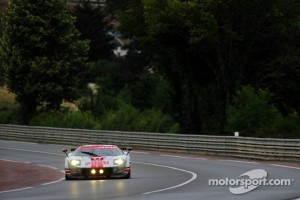 The spirit of Le Mans as a race is twofold. The battle for overall honors features the manufacturers pioneering new technological innovations over the course of the race’s nearly 80-year-old history. The second is the nature to allow true privateers, weekday workers who have the thrill and appreciation for the sport, the chance to compete.

In 2011 the first true class designed specifically for the “gentlemen” driver, if you will, has come to fruition with the creation of the GTE Am class. Robertson Racing competes here, with the husband-and-wife team of David and Andrea Robertson along with their professional co-driver, driver coach and good friend David Murry.

It just took 45 more years from when I first found out about it.

The Robertsons set a historical mark this weekend before even hitting the track. David and Andrea are not only the first grandparents to race at Le Mans, but the first husband-and-wife team to race in the same car with the same surname. Enzo Calderari and Lilian Bryner have done this previously on several occasions.

Asked what his first thoughts of scrutineering were earlier this week, David Robertson’s response was simple.

“We’re at Le Mans! Wow! This is something I just knew I wanted to do; it just took 45 more years from when I first found out about it.”

He grew up in Scottsdale, Ariz. and immediately had his interest piqued when watching the race on television at age 12. Because of work and finding the available time to do it, it has taken until 2011 for the team’s Le Mans dream to be realized.

“I went to sprint car races at (now defunct) Manzanita in Phoenix, but there wasn’t potential until club racing to do this,” he said. “Working takes up most of your life. It wasn’t until 49 we had time to do that. I understand that, and if you didn’t do karts from when you were six, you have to break it down until things you can do. We’ll learn this and that and the next level. We’re lucky to be here before we’re 70.”

Indeed it has been a five-year process moving from club racing up the ladder, winning races in lower division series with a Panoz Esperante, but then taking on the challenge of bringing their current Ford GT back to Le Mans.

The Robertsons arrive at Le Mans with a car that has come a long way from its 2008 debut in the American Le Mans Series. It’s a development project that has involved with project initiator Kevin Doran, Dick Barbour of Dick Barbour Racing, and a crew which includes team manager Andrew “H.” Smith and chief engineer Lee Penn, among others.

An air restrictor break which was granted before the Le Mans test day in April allowed the Ford GT to be on pace with where it needed to be, Robertson said. 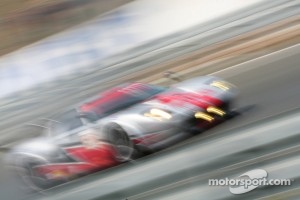 The team’s second car was nearly able to race this year as well, but not enough entries dropped out to promote the car from the reserve list. That meant Murry replaced Boris Said after having originally been nominated for the second car with Anthony Lazzaro and Colin Braun.

“We’d dreamed of a formation finish, with both cars crossing together,” Robertson said. “But not having Boris and Colin is a shame with the second car that didn’t get in. Murry is back here in his traditional slot.”

Murry, for his part, said Le Mans this time around is a completely different experience compared to what he has done in the past.

Robertson drew on what he saw from scrutineering and looked to see if it can be adapted to American racing.

“There are things here American racing should pay attention to,” he opined. “We’re out here doing tech, work’s getting done, but people and fans are seeing this and learning. Why aren’t they doing this? That’s something IndyCar could learn from, they’ve split twice (in his words, USAC and the CART/IRL splits).”

It’s been a difficult week with a spin during practice on Wednesday and an engine change on Thursday, Andrea Robertson said. Even worse was the team’s morning warm-up session when the car stopped on track prior to Porsche Curves and was being lifted onto a flatbed.

Through it all, the team is working to overcome it. The key to a strong finish at Le Mans is staying out of the pits as much as possible and not making any mistakes. Robertson joked about his ability to drive a perfect race, but admitted paying attention to all the surroundings without getting too wrapped up in the atmosphere will help the team in the race.