Following in his father's footsteps, Leo Mansell continues to climb the ladder in motorsports. The son of 1992 Formula One World Champion, Nigel, has made the move to sportscars for 2009, signing with Team Modena in the European-based Le Mans ...

Following in his father's footsteps, Leo Mansell continues to climb the ladder in motorsports. The son of 1992 Formula One World Champion, Nigel, has made the move to sportscars for 2009, signing with Team Modena in the European-based Le Mans Series. The 24-year-old racer will team with Antonio Garcia in a Ferrari F430 GT for the five-round championship, as well as the famed 24 Hours of Le Mans in June. 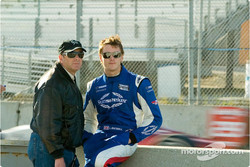 "We are pleased to have Leo joining Team Modena," said team principal Graham Schultz, "We are looking forward to a long relationship with Leo, and his partnership with Antonio Garcia should be a very strong one - Antonio has been a key part of Team Modena's international race success. Our link with Nigel is exciting, he will bring his huge experience of motorsport to bear on our programme and help us move to a new level."

While Leo will be taking his first steps in the world of sportscar racing, he is no stranger to the sport. He and his brother, Greg, began their careers in karting before moving up the ranks to Formula BMW UK. It was then on to British F3 in 2007 before jumping across the pond to the Atlantic Championship last year. Now, it's back to Europe for the elder brother, who will strap behind the wheel of a closed-top car for the first time.

Leo does have some experience behind the wheel of a sportscar, though, as he and his father tested Chamberlain Synergy's Lola B06/10 AER prototype last July. It was an attempt to put all three Mansells in a car for the Petit Le Mans, but the plans never materialized.

"I think Leo is a natural for sportscar racing, he really took to the cars we tested last year," Nigel Mansell said. "The whole package has come together with the team, the Ferrari, Michelin etc, and we couldn't ask for a better team-mate. It will be a very exciting season, it will be my first visit to Le Mans and I am looking forward to it!"

After campaigning an Aston Martin DBR9 in the LM GT1 class for the last three seasons, Team Modena makes the switch to LM GT2 with its new Prancing Horse. In addition to its newly formed relationship with Ferrari, the British-based team will have the knowledge and experience of one of the most successful driver's of all-time. Another plus is that Nigel drove a Ferrari F430 GT before, taking part in the FIA GT Championship-season opening round at Silverstone two years ago.

"It's wonderful to have Leo and Nigel on board," said sporting director Rik Bryan. "The Mansells are a talented motorsport family and I think Leo will be suited to racing sportscars, and it's fantastic to reunite the Mansell name with Ferrari!"