Level 5 Motorsports entered into a bit of an unknown territory at last weekend's official Le Mans Test, having never competed on the legendary Circuit de la Sarthe while also still coming to grips with its new Lola-Honda package that debuted just one month ago at Sebring.

We got a lot accomplished today.

But after logging nearly 1,000 miles between its two LMP2 cars over the eight hours of available track time, Sunday's test could be considered nothing short of a success.

It was particularly rewarding for team owner/driver Scott Tucker, who completed nearly 60 laps, equivalent to 6 stints, at the wheel of the team's No. 33 Microsoft Office 2010-sponsored Lola-Honda Coupe. Tucker's last visit to Le Mans was at the 2010 24 Hours where he drove the famed Audi R-10.

"We got a lot accomplished today," said Tucker, a three-time national driving champion. "It was our plan all along for me to spend the majority of the day in the No. 33 car, so we stuck to it. And right when the bell rang at 9 a.m., we were rolling. We're very fortunate as today was a good day for us."

Tucker's marathon day got off to a rough start when his car suffered a turbo failure. But a quick turnaround by the David Stone-led crew saw the car promptly return to action. By the end of the day, the defending LMPC champion had shaved off nearly 10 seconds from his personal best time set in the morning. 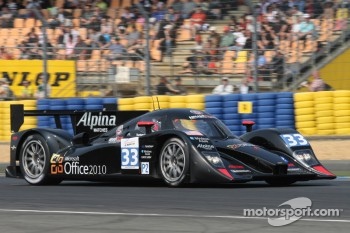 Veteran Frenchman Christophe Bouchut and Portuguese driving standout Joao Barbosa took turns in the No. 34 machine, concentrating on aerodynamic and suspension developments. With both cars sporting Lola's low-downforce aerodynamic package, there was much to be learned.

Despite a late-session glitch which caused a power loss, Bouchut managed to turn the car's quickest lap time of the day, a 3:48.174. It put the Level 5 crew sixth quickest on the time charts and best of the Honda-powered entries in the competitive field.

"The team is happy because we improved a lot of things on the car," Bouchut said. "We had a few small issues, especially at the end when we were losing power in the engine. I couldn't go any faster so we made the decision to reduce downforce. It was a bit of a 'rock and roll' move, but it worked out. Everything we learned today will bring a lot of good things for the race."

Barbosa was pleased with the progress made in the car's development after completing two double-stints over the course of the day, improving each time.

"We tried to split the sessions between myself and Christophe to try and get a little bit more speed out of the car," Barbosa said. "We have to run a very low-downforce aero setup to try and make up for the speed that we don't have on the straights. I think we're in a good direction and we'll have a pretty decent and competitive car for the race."

We have to run a very low-downforce aero setup to try and make up for the speed that we don't have on the straights.

Level 5 has battled lack of power issues, particularly with the way Honda's new 2.8-liter twin-turbo V6 has been balanced to its competition in LMP2. While the Automobile Club de l'Ouest, the Le Mans rule-makers, gave the engine a larger air restrictor prior to Long Beach, it didn't appear to make as much of a difference as the team had initially expected.

With a six-second gap between the pace-setting LMP2 entry and Level 5's quickest Lola-Honda Coupe, team manager David Stone is hopeful that the ACO would consider a further balance of performance adjustment prior to the 24 Hours of Le Mans in June.

Before then, Level 5 heads to the historic Spa-Francorchamps circuit in Belgium on May 5-7, where the team will be searching for its third consecutive victory and back-to-back wins in the Intercontinental Le Mans Cup.