Lopez "cried all the way back to the pits" after puncture 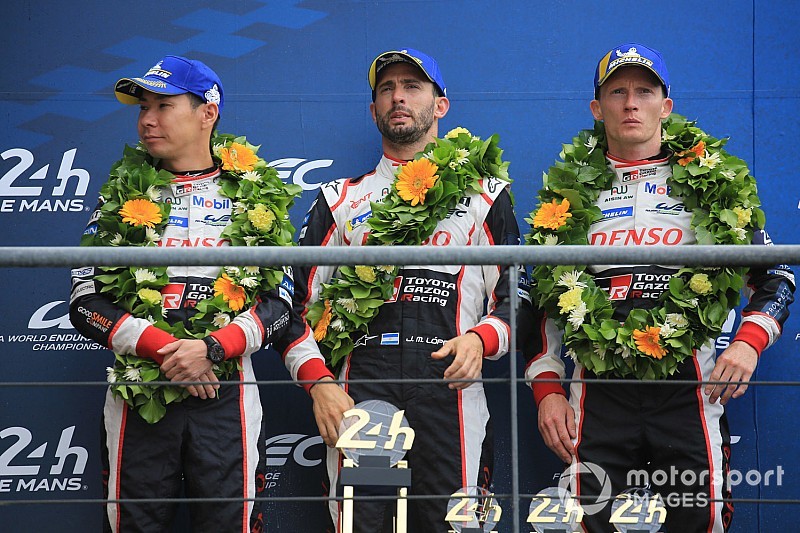 Toyota LMP1 driver Jose Maria Lopez says the puncture that cost him and his teammates in the #7 car a probable Le Mans 24 Hours victory made him "cry all the way back to the pits”.

Lopez held a comfortable lead in the #7 Toyota TS050 Hybrid he shares with Mike Conway and Kamui Kobayashi approaching the final hour when he picked up the puncture, after which he pitted.

But a sensor issue prompted Toyota to change the right-front tyre instead of the right-rear during that stop, meaning Lopez had to nurse the car back to the pits for a second time - a delay that allowed the sister #8 car of Kazuki Nakajima that went on to win the race to move into the lead.

Lopez lost less time before his first visit to the pits because the pressure in the punctured tyre had not decreased dramatically.

But it fell below 0.5bar on Lopez’s second outlap, which forced him to drive at a slower speed to prevent the tyre from delaminating.

Lopez explained that he had been told by the team as he left the pits the sensor would be reset, but that he realised “a few metres” after exiting the pitlane that he still had a puncture.

"We left a new set of tyres for this stint because we wanted to minimise the chances of that [a puncture] happening,” he said. “It's really strange, because it's the last few stages, you're not taking any kerbs, you try to do everything perfectly.

“[After] half of the lap, I saw the alarm. It wasn't too bad, because it [the pressure] didn't go too low so I could still go about 200km/h, so that's why I didn't lose much.

“The problem is that when I exited again with a puncture it was too low, and I was risking too much to blow the tyre up and lose everything so I had to go back to the pit at no more than 50km/h."

Toyota explains why it didn't change all #7 car's tyres