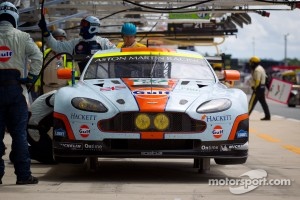 Berlin/Le Mans (rol/ot) Friday evening (15th of June), the German sports car pilot Stefan Mücke came back soaked from the driver’s parade of the 80th running of the legendary 24 hour race of Le Mans, which is scheduled for Saturday (16th of June), 3 o’clock in the afternoon. In the city in North-western France it rained and it only was 15 degrees Celsius. „Even if it was cold and wet, it was impressing one more time. Especially because the fans and visitors were really tough and kept their positions in the rain the whole time“, the Berlin said.

The 30 year old is optimistic before his 6th participation at the most important and hardest car race of the world, because he will start from position two in the GTE Pro Class together with his Aston Martin factory driver colleagues Darren Turner (Great Britain) and Adrian Fernandez (Mexico) behind the wheel of the Vantage GTE. The pole position in this class got the Ferrari 458 Italia of Frederic Makowiecki (France), Jaime Melo (Brasil) and Dominik Farnbacher (Germany), who was only four tens of a second faster than the Aston Martin at the Qualifying in the night to Friday.

„I am happy to drive the first Stint“, Stefan Mücke said, who will be supported on track by his daughter Lucie, his wife Annette and his father Peter. „The second position is a good position to start into the race and helps us to realize our goal, a podium placing in our class at the season highlight. But the main goal will be to reach the finish line on Sunday afternoon.“ The 24 hours of Le Mans on the 13.6 Kilometre long track are the third run of the new FIA World Endurance Championship (WEC) same time.

Jeannette and Montecalvo to start fourth at Le Mans