Sunday’s scrutineering at Le Mans could have gone by two other unofficial names: “scruti-raining,” or “Michael Waltrip meets France.”

Name one is a contender because it poured. Consider it Noah’s Ark-style, except instead of two of every animal being saved it was three of every driver from each team being shielded by umbrellas. They were out en masse to avoid the deluge. Amazingly, though, so were the fans — who braved the elements for a chance to see their favorites.

It never seemed stressful. There was a plan, and I knew it.

The second name is due to the third car through the scrutineering line — the No. 71 AF Corse Ferrari F458 Italia. By the car name alone, there isn’t anything substantive to note other than it represents one of the six new F458s making their 24 hour-race debut this weekend.

But one look at the driver lineup reveals a far different story. Waltrip is one of the drivers behind the wheel, and while he has two Daytona 500 victories under his belt, there was nothing that could prepare him for this experience.

Consider that Rob Kauffman, his partner with Michael Waltrip Racing and co-driver for this race, declared Waltrip’s trip to Le Mans akin to the 1987 comedy classic “Planes, Trains and Automobiles” which starred Steve Martin and the late John Candy. 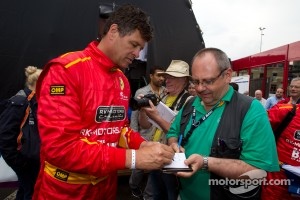 Waltrip had called the NASCAR Camping World Truck Series race for the SPEED Channel on Saturday and then had to be in Le Mans by 3 p.m. local time Sunday. That’s when the fun began.

“It never seemed stressful. There was a plan, and I knew it. Left the booth. Got in a truck. Hopped in a helicopter. Made it to the airport. Got on a jet. Flew to another airport. Flew across the ocean. Landed in Paris. Got in a car. Took another helicopter. It sounds like a lot of stuff, but I made it here.”

I’m no expert on international travel but having had my own original flight canceled en route to Paris this weekend, before arriving in Le Mans, I can understand how one little glitch could throw the plans awry.

“Never take for granted that everything will work right,” he said. “Everything was smooth and ran on time.”

It’s a big track but it’s all about timing.

Waltrip’s raced at another of the world’s greatest race courses, Spa-Francorchamps, both in a 24-hour endurance event last year and in this year’s race under the Intercontinental Le Mans Cup in May. Spa and Le Mans are completely different animals as race courses and for Waltrip, learning the nuances and intricacies of sports car racing were far more important.

“They’re a lot different, but then again for me it’s a lot of the same, getting used to the car, and learning the track,” Waltrip said. “I fortunately got to learn for 24 hours at Spa, I was very comfortable and had good pace. When we tested Le Mans, I had a bit of a food bug, didn’t feel well. Just made sure I ran my 10 laps, and I was thinking about lap seven and eight I felt comfortable about which way the track is going.

“It’s a big track but it’s all about timing; run a mile, then hit a chicane. Entrance and exit is so important to good lap time. You see it up there, and I don’t want to overshoot it, have to hit my braking points. I know I can do it better next time, but it’s another four minutes before I get back! Learning the track was all I accomplished at the test.”

He’s already showing he loves the experience — at one point as I attempted to get my few questions in among a crowd of swarming journalists from around the world, he stopped to pose with this year’s Miss 24 Hours of Le Mans. 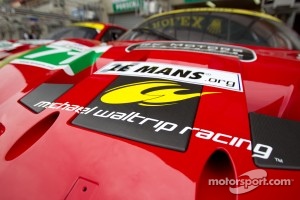 There may be further sports car plans for MWR going forward, as both Waltrip and Kauffman explained. Both said AF Corse team principal Amato Ferrari has become a good friend, and Waltrip said there are some people they are working with to secure a greater presence in 2012.

“Amato (Ferrari) has become a good friend,” Kauffman said of AF Corse founder and team principal Amato Ferrari. “We’d be looking to expand our operations, possibly run some ILMC, or Petit (Le Mans) with Don Panoz and the ALMS. But let’s focus on next Sunday first, then plan from there.”

Waltrip’s initial trip through scrutineering reminds me a bit of Patrick Dempsey’s turn in 2009. Similarities include the fact it’s a well-known American star out of his usual element (NASCAR versus acting), introduced to the crowds, and running an AF Corse-prepared Ferrari. Dempsey was, of course, in a F430, so give “Mikey” the edge on getting a shot at the F458.

Having been here for both experiences, I don’t think the comparison is unrealistic.

Others drawing a smattering of cameras and autograph seekers included David Hallyday, who is in the No. 48 Oreca 03 in the LMP2 class, the son of the legendary French singer Johnny Hallyday (he’s as big in France as Elvis Presley, I heard) and Henri Pescarolo, France’s long favorite team owner who is back with his newly renamed Pescarolo Team following a year’s absence.