In 2013, as the world-renowned event celebrates its 90th anniversary, Motul has further strengthened its links with the Automobile Club de l’Ouest (organisers of the 24 Hours of Le Mans).

Internationally recognised as a name representing quality, reliability and performance in endurance racing, Motul has been involved with the jewel in the crown of sportscar racing – the 24 Hours of Le Mans – for over 60 years, one of the most enduring partnerships in motorsport. 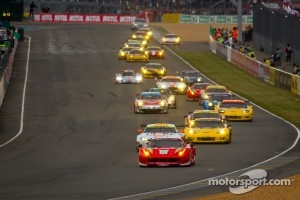 In 2013, as the world-renowned event celebrates its 90th anniversary, Motul has further strengthened its links with the Automobile Club de l’Ouest (organisers of the 24 Hours of Le Mans). A three-year agreement has been signed which will see the grandstand at the Raccordement corner of the circuit decorated fully in Motul’s iconic red and white colours.

‘Raccordement’ – where the permanent Bugatti circuit meets the public road section of the infamous 14km track used for the 24 Hour event – is both symbolic and strategically important to Motul. The specialist lubricant company’s name and colours have been evident there for many years and now, to reinforce that presence, the grandstand will show Motul on its front, back and roof for maximum visibility on the ground and in the air.

A true test for motor manufacturers, the 24 Hours of Le Mans has also been a living test bench for the lubricants specialist, Motul. Almost 60 years ago, to support the launch of ‘Motul Century’ - the first wholly multigrade lubricant, Motul chose the Sarthe event to demonstrate the performance of its products. Since then the company has shared much history with Le Mans both on and off track, including the technical support of 182 vehicles which have yielded 13 class victories.

This real life product testing continued in 1971 with the launch of Motul 300V, the first 100% synthetic lubricant and, in recent years, a licensing agreement with the ACO has sanctioned the successful launch of 300V Le Mans, a lubricant dedicated to endurance racing.

Motul’s Motorsport Coordinator, Romain Grabowski, is enthusiastic about the approach of the 90th anniversary running of the 24 Hours of Le Mans: “Le Mans and Motul have been linked for so many years, it seems entirely appropriate that we should help celebrate this wonderful occasion in June with an even greater visibility. I’m delighted that our name and colours will be on show to our technical partners, our guests, fans and spectators at the Raccordement corner and on the grandstand there.”

Motul's presence, already strong around the circuit and alongside the many contenders, will be strengthened by this magnificent grandstand decorated henceforth with the brand's famous red and white logo.

This presence represents a real success of the relations uniting ACO and Motul. Since 1923 when the 24 Hours of Le Mans was created, we have always favoured loyalty in our partnerships, as can be seen by this new agreement with Motul.”

The general public will also be able to learn more about Motul’s 300V product via a film to be shown on the giant screens about the circuit, and revel in the sight of the Motul grid girls on the starting grid.