After 35 years away, Alpine makes its comeback in Le Mans with the same philosophy of wisdom and intelligence rather than means to be a race leader.

Paris, Alpine announced today that they are car number 36 in the Le Mans 24 Hours, with Nelson Panciatici, Pierre Ragues and the third driver, freshly appointed, Tristan Gommendy behind the wheel. 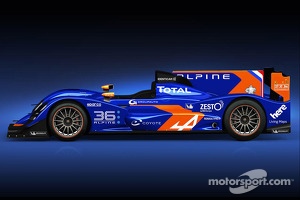 Nelson Panciatici, the youngest of the team, and Pierre Ragues, were confirmed in the initial programme. They are now joined by Tristan Gommendy for the Le Mans 24 Hours.

The three French drivers, all discovered and trained in Renault’s single-seater division, have between them accrued ten appearances on the Le Mans circuit.

For Nelson Panciatici, it’s the impatience to get behind the wheel of the Alpine which prevails: “I can’t wait to get to Castellet and turn those wheels in blue!

We’ll continue the work we started with Michelin in Magny-Cours. We’ve already made huge progress and I’m quite sure that after the various trials our engineer, Olivier, has planned for us, we will be competitive enough to aim for victory.

That’s our objective and we’re aware that the LMP2 competition will be fierce! I know I can count on my co-drivers, Pierre and Tristan’s experience, to help me progress in this discipline.

There are a few more trial sessions and two races left to get us ready for Le Mans 24 Hours and I’m feeling confident!”

Philippe Sinault tells us: “We’re now heading for the Paul Ricard circuit to put the car on the track and start work. Our aim is to be a front-runner in the highly competitive LMP2 category.

We will put the various trial sessions to good use, as well as the first two ELMS races, to prepare for Le Mans 24 Hours, which remains the high point of the season.”

From the day he launched Alpine, Jean Rédélé had decided to build up the name through sporting success. We know the superb results achieved in the most prestigious challenges, notably the Mille Miglia and the Monte Carlo Rally.

What Jean Rédélé also quickly realised was that no make of car can really be classed as “sporting” if it doesn’t take part in the Le Mans 24 Hours, which rules supreme in the international racing calendar and is followed the world over with a major impact on the make’s image should it win.

After 35 years away, Alpine makes its comeback in Le Mans with the same philosophy of wisdom and intelligence rather than means to be a race leader.

The Signatech-Alpine team, managed by Philippe Sinault is entirely on the same wavelength and to represent Alpine motivates them tenfold to reach their objectives!