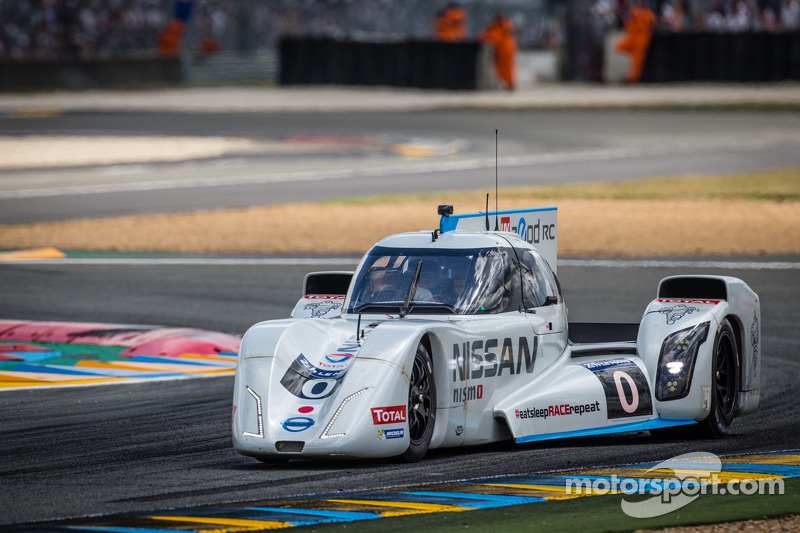 LE MANS, France, Saturday, June 14, 2014: Nissan’s assault on the Le Mans 24 Hours may have ended early, but the revolutionary Nissan ZEOD RC electric prototype still leaves Le Mans having reached its historic goals of hitting 300km/h on the Mulsanne Straight and recording a complete lap of Le Mans on electric power only.

The unique prototype - which features both internal combustion and electric power sources - reached its first target during Thrusday night qualifying when Satoshi Motoyama exceeded 300km/h before the first chicane on the Mulsanne Straight.

Nissan’s other key goal was to complete an entire 8.5-mile lap of Le Mans on pure electric power. GT Academy winner Wolfgang Reip was at the wheel when the team achieved this goal during the morning warm-up.

Reip started the race aboard the ZEOD RC and completed five laps before losing drive at the 23-minute mark. A suspected gearbox issue caused an early retirement.

Remarkably, the gearbox was one of the more traditional parts of the powertrain package. Both the 1.5 liter, 40 kilogram, 400 horsepower, three-cylinder engine and the pair of 110kW 40,000rpm electric motors had performed faultlessly in the early part of the race.

“They say that life is a rollercoaster but certainly motorsport takes this to the next level. Just today we’ve had massive highs followed by a temporary low,” said Darren Cox, Global Head of Brand, Marketing & Sales, NISMO.

“This morning the team did a brilliant job in achieving the electric lap. We only tried it once and we completed it. That is an amazing accomplishment for Nissan and electric vehicles.

“We were very confident in starting the race and earlier in the week we had already exceeded 300km/h. We were looking forward to doing some more electric laps throughout the race but a traditional part of a gearbox broke.

“It is a real shame because we were really looking forward to showcasing the EV technology in the race.

“It has been an amazing experience for everyone that has been involved. I hope everyone who was worked on the project and put in so many hours will remember the high when the car completed its electric lap of Le Mans.”

Sadly neither Motoyama nor Lucas Ordóñez were able to complete any race miles during the race.

For Le Mans 2015, Nissan will return to the LM P1 class – launching an assault against Audi, Toyota and Porsche for outright honors at the world’s most prestigious endurance race.

“Being at the wheel for the first all-electric lap was certainly an amazing thrill and very rewarding after spending so much time during the development of the car,” Reip said.

“The race was obviously very disappointing but having got a taste of Le Mans now, I can’t wait to get back. This is an amazing race and I’d love to be a part of it again."