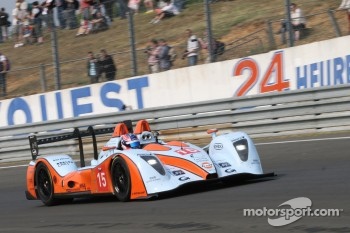 The team's primary objective for its pair of LMP1s (#15 and #24) was to evaluate the new aero package developed with the 24 Hours principally in mind, while the LMP2's (#35) aim was to qualify the two rookies that help comprise its three-man crew. The majority of the programme was successfully accomplished despite some technical issues and off-track moment for the #24 car at the end of the morning's session.

Sebastien Philippe, Team Manager: "The team completed a lot of good work today. The test had no competitive significance so the difficulty for the team and drivers was to remain focused without worrying about our rivals. We have tested many things and validated several aerodynamic solutions. For the #15 LMP1 we were able to follow the proposed programme with Matthieu Lahaye, Guillaume Moreau and Pierre Ragues. The day was a bit more difficult for the other two cars, especially for the #24 LMP1 of Richard Hein, Jacques Nicolet and Jean-Francois Yvon. At the end of the morning, Richard had a big off at the Ford Chicane and the damage could not be repaired in time for the afternoon. Nevertheless, work accomplished with #15 will be applied to #24. Regarding the LMP2, we encountered a suspension problem that delayed us for nearly three hours this morning. The team did an excellent job and the car was able to rejoin the track. Our main objective was to qualify the two rookies, Patrice Lafargue and Andrea Barlesi, and that has been accomplished. But towards the end of the afternoon, Frederic Da Rocha was hit from behind with the impact breaking the diffuser on the right rear. We preferred to stop before the session ended as we did not want to take any additional risks before Spa."

Our main objective was to qualify the two rookies, Patrice Lafargue and Andrea Barlesi, and that has been accomplished.

Christophe Chapelain, Technical Director: "Overall, today has been positive and allowed us to validate several aero configurations and set-ups. We completed a lot of short two lap stints without trying to set fast lap times, which allowed us to acquire a lot of information. Now we have to go through all the data in detail and fine tune the good basic set-ups for Le Mans week's first practice session. We have a good V-max, one of our major objectives of development for this year."

Jacques Nicolet, OAK Racing team owner: "We had a very important working plan today and managed to stick to a large part of it. The technical conclusions are more than positive but next week is going to be very busy in order to properly prepare our three cars for the second round of the ILMC in Spa."

OAK Racing returns to competitive action in round two of Intercontinental Le Mans Cup at the famous Spa-Francorchamps circuit on May 7.