With practice due to start later today in preparation for the 79th running of the 24 Hours of Le Mans, Olly gives his news and views on the run up to the race – his 10th for the GM Corvette Racing team.

1) This will be your 10th Le Mans with Corvette Racing. What has changed most about the event since your first LM 24 with them in 2002?

It’s going to be a classic.

The event has continued to evolve and develop over the last ten years and each year it’s got a little more professional, which brings even more high pressure. The level seems to go up year on year, whether it’s the teams in the race, driver line ups or the way that Michelin interacts with us in terms of preparation, tyre construction and so on. It’s constantly improving.

Since 2002 the team has refined its approach to the event, implementing what they’ve learnt year on year. In the ten years I’ve been driving for Corvette the car has evolved massively and the way the team approach Le Mans is very different now to a decade ago. One of the things that’s changed over the last couple of years is that they spend more time focussing on making the drivers as prepared as possible, recognising that the driver is a very important part of the machine which makes the Le Mans race work. Corvette has worked super hard on cooling and cockpit comfort – the seat, AC unit, carbon monoxide meter in the car, drinks system, rear view camera – and the spotting that the team does to help us avoid potential incidents in the car. These are all things which have evolved within the team over the last decade.

2) How much are you looking forward to teaming with Jan again at LM and why?

Jan has proven to be if not the fastest GT driver, then certainly one of the fastest amongst us all the years he’s been here. Of course you want to be fastest in your team, but you also want fast team mates. If you have that you’ve got the best possible chance of winning the race. Jan is also a driver who makes very few mistakes; he’s always motivated and he’s a lot of fun which is important during a week like this one. Sometimes in very tense situations he’ll crack a joke at just the right time and that relieves the tension.

3) What does Richard Westbrook bring to your trio?

He brings a lot of speed and a huge amount of experience – even though this is only his second year of doing Le Mans. He’s raced in sportscars a long time and in a lot of different series and done 24 hour races at the Nurburgring and Spa but, strangely, not here.

He’s very intelligent and smart in the car and every car he gets into at the moment, he’s quick. He’s race sharp because of the amount of driving he’s doing. He’s also a huge amount of fun and brings a great element of the British humour to the team and doesn’t mind if he’s being the butt of the joke or playing the joke himself. He’s a real sport.

4) How has your preparation for a 24 hour race changed over the years and what is the most important part to the build up?

I’ve realised after doing so many 24 hour races that it’s important to be well rested and well fuelled and hydrated. This year in particular I’ve been working in conjunction with a number of doctors and been on an intensive course of vitamin and mineral supplements to make sure I’m as healthy as possible at the start of the race. 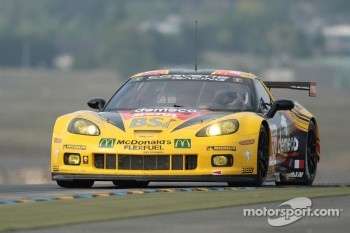 Le Mans week is a huge mental and physical challenge because it’s such a massive race. The whole focus of the year is around this event and inevitably the pressure is very intense this week. To deal with all of that for 6/7 days you need to be fully loaded at the start of the week. Three weeks before an endurance event I make sure that I can run [on the road] for 2-2.5 hours without any problems. Back in April I did a marathon in 3hr and 17 minutes and have kept up that level of fitness and carried it all the way through to this point.

One of the things I’ve learnt with the doctors is that my blood sugar levels were spiking and I’ve been working to get that under control – apparently it’s quite a common thing with endurance athletes. By taking certain supplements I’ve been able to smooth that out and there are less peaks and troughs which means I’m not craving food all the time!

5) There’s fierce competition once again in the GTE class(es). Who do you consider will be ‘the ones to watch’?

BMW has proved so far this year to be very competitive and strong in both of the ALMS races so I think they’re at the front. The JMW Ferrari on Dunlop tyres has done well in LMS races, and any car with Gimmi Bruni, Jaime Melo, Toni Vilander or Dominik Farnbacher in will be good. The Flying Lizard Porsche also has a very strong line up this year with Pat Long, Jorg Bergmeister and Lucas Luhr…the list is long.

I think a large part of the class will be hugely competitive and I don’t think you can pull anyone out to be absolute favourites. Audi and Peugeot will be fighting it out for victory overall, but in GTE there are probably 8 or 9 cars that genuinely are competing for victory. It’s going to be a classic.