Signatech-Nissan on top of the timesheets!

Teams took advantage of the 24 Hours of Le Mans Test Day to prepare for the twice around the clock classic to be held June 11 and 12. ORECA Racing Car Manufacturer was present, with three ORECA 03 cars - entered by Race Performance, Signatech-Nissan and TDS Racing, and three ORECA-FLM 09 cars, run by Genoa Racing, Hope Racing and JMB Racing.

The car is handling very well, but we’ll have to be wary of the defending champions, who were absent here at the Test Day.

Already one of the frontrunners at the 12 Hours of Sebring, Signatech-Nissan once again showed the potential of the prototype designed in the Signes factory, with the fastest time in LMP2, signed by driver Franck Mailleux. On the Formula Le Mans side, JMB Racing and Olivier Lombard were the quickest.

Just behind the Zytek/Greaves during the morning session, the ORECA 03s took control in the afternoon, with a dominant performance from the #26 03 entered by Signatech-Nissan where Franck Mailleux, Soheil Ayari and Lucas Ordonez signed the fastest time in 3:42.992. It was Franck Mailleux who completed the fast lap, the Bretagne-native satisfied with the work done during the day. 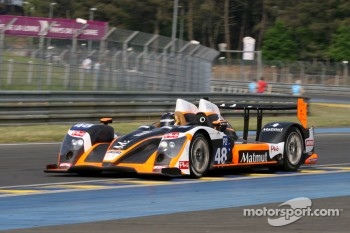 “Everything went well,” said Franck. “The first objective was to be sure Lucas completed his ten mandated laps, which he did without problem. His times are encouraging for the future. We worked well on the aero package. The car is handling very well, but we’ll have to be wary of the defending champions, who were absent here at the Test Day. We still need to analyse these tests and prepare as best as possible for the 1000km of Spa, which will arrive quickly. We are hoping for a good result in the Belgian Ardennes.” It’s worth noting the good performance of Lucas Ordonez, GT Academy graduate who, for only his third year in auto racing, has shown convincing speed.

The second fastest time goes to another ORECA 03, the one entered by Team ORECA-Matmut. TDS Racing also showed good promise with the fifth quickest time. Driver Pierre Thiriet found his marks on the long Le Mans circuit, along with Mathias Beche and Jody Firth who also completed their obligate ten laps. This despite the fact the team run by Pierre Combet will not be present for the 2011 edition of the race. Race Performance was also on track, with about 50 laps completed and the eighth fastest time for drivers Frey/Meichtry/Rostan. 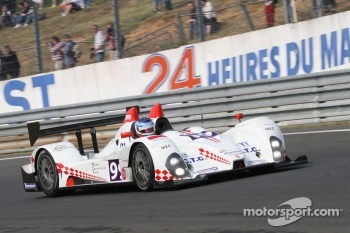 Although the ORECA-FLM 09 had already completed laps around the Le Mans circuit before the 2009 24 Hours of Le Mans, it was the first time the cars would be tested against other categories on the long Circuit de la Sarthe. Three teams showed up to the party: JMB Racing, Genoa Racing and Hope Racing.

Olivier Lombard (JMB Racing) was the quickest, good enough for 23rd overall among the 54 cars present. American Le Mans Series and Le Mans Series regulars Julian/Zugel/De Crem/Petersen (Genoa Racing) completed laps without problem, making Elton Julian a very happy man: “For us, the day was good. The car worked marvelously. This track is fantastic with a succession of curves starting at the Porsche curve that is incredible from a driver’s standpoint. All the different sections of the track are different. You also had to be careful of traffic. We are very happy we came.”

Hope Racing also did well with the second quickest time in the morning for Moro/Qi Zhand/Marroc/Cicognani. In total, the four drivers completed 56 laps. As for the ORECA Swiss Hy Tech-Hybrid, present in LMP1, it completed 22 laps. Overall, a big step in terms of testing for this ambitious project.

This Test Day was a chance to see how drivers who started their careers behind the wheel of a Formula Le Mans stacked up against the rest of the field; a field that contains several FLM graduates as well.

Next rendez-vous at Spa on May 7…