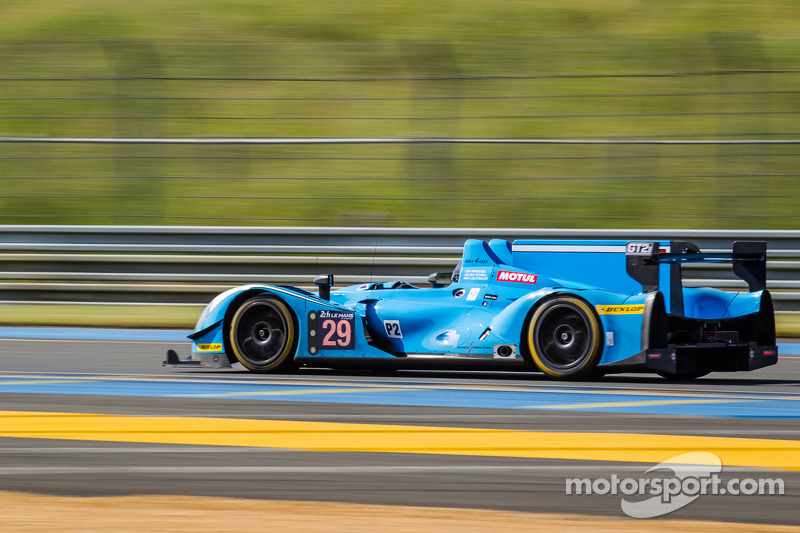 The no. 29 Morgan-Nissan driven by Niki Leutwiler and Julien Schell and Léo Roussel finished 18th overall and 10th out of 17 cars in its category, LM P2.

Pegasus Racing did better than just achieve its target at Le Mans. The no. 29 Morgan-Nissan driven by Niki Leutwiler from Switzerland and Frenchmen Julien Schell and Léo Roussel finished 18th overall and 10th out of 17 cars in its category, LM P2. As is usually the case in a race of this nature the team ran into a few glitches and unexpected issues, which delayed its progress, but in the end the guys from Strasbourg were very happy with the overall result.

The race began with uneventful practice and qualifying sessions on Wednesday. The next day was the exact opposite. During the second qualifying session Léo Roussel had a big off trying to avoid the no. 1 Audi limping along the track after the quick Corvette corner. The Morgan-Nissan slammed nose first into the concrete wall on the right-hand side of the track, and the result was a badly-damaged motor car, which the team did a superb job repairing on Friday. In the Saturday morning warm-up it ran perfectly, and the no. 29 Morgan-Nissan took up its position on the grid for the 82nd Le Mans 24 Hours in 23rd place overall and 14th in LM P2 with Julien Schell at the wheel.

The first noteworthy incident in the Franco-Swiss team’s 2014 Sarthe outing was the storm that hit the circuit at the end of the second hour when all the cars were on slick tyres. Le Mans rookie Niki Leutwiler was in the car at the time, and he managed to keep it between the hedges unlike a fair number of well-know drivers!

The other highlight of the early stages of the race was Léo Roussel’s maiden outing in the Le Mans 24 Hours making him the youngest French driver to compete in the race since its creation in 1923! The man from the Ile de France made a big impression as he dialled in a series of quick laps. Unfortunately, he had to crawl round the track for almost a lap due to a cooling problem on the left-hand front brake. This cost no. 29 three laps and it dropped from 18th to 42nd place in the overall classification.

During the night the blue Morgan-Nissan fought its way back up into the top 20, but it was then hit with two stop and go penalties for speeding in the pit lane. Late on Sunday morning when Leutwiler had just completed around twenty laps the car lost a front wheel for reasons unknown at the entry to the Porsche curves. The final incident was a stop to deal with premature brake disc wear.

Julien Schell: “I’m very happy at being able to bring this project, which we launched last winter, to a successful conclusion. To put it all together we had to overcome several obstacles; we never let ourselves become discouraged when we heard the bad news in February that we hadn’t been selected. At the beginning of May it was announced that the team had been integrated into the final list of entries. So we started a race against the clock before the 24 Hours had even begun to put in place the organisation, logistics and the backup for the team, the stock of spare parts as well finding the finances so that it would all work on the day! Finishing tenth in LM P2 is a great result for a project that began a month before the test day.

In the race itself we didn’t have an accident or a collision or any major mechanical glitches despite the fact that we had to rebuild the car on Friday. The accident on Thursday made things very difficult. It upped my stress level and the rain early on in the race didn’t help either! This year’s Le Mans 24 Hours represent a first step for Pegasus Racing. Next year we hope we’ll be in a position to start preparing for the event at an earlier date to clinch a better result.”

Niki Leutwiler: “eighteen, thirty-six and fifty-three years of age: our team represents three generations of drivers! I watched this race so many times on TV, I had expectations to do it myself one day, but honestly I didn’t believe I could ever do it. The opportunity has presented itself by meeting Julien, we started dreaming together last September. That’s why my emotion was high when I crossed the line. It’s unbelievable that this project has realised itself. I’m obviously very happy, no doubt about that, but even more so for Julien as it means so much more to him. I’m happy to have repaid the confidence he’s shown in me.”

Léo Roussel: “We finished the race and it’s a waking dream. We didn’t believe it till 15h00 and now it’s done. I feel very emotional about it as the team and the guys from Onroak really supported me after Thursday evening’s accident, which needed a lot of work to get the car back into running order. The overall result is great given the team’s current resources compared to the rivals it beat. We were reliable and pretty quick although we lost a fair chunk of time due to niggling problems. I’d like to thank Julien and Niki for putting their trust in me and the whole Pegasus racing team for all the work achieved, Onroak for their rapid reactions, and the Extrême Limit team and my family for their support.”

On 19-20 July Pegasus Racing will be at the Red Bull Ring in Austria for the third round of the European Le Mans Series.