Not only is Le Mans the highlight of Team Peugeot Total’s season, but it is also an event apart on the motor racing calendar. It is an unpredictable and merciless competition which calls for meticulous preparation. The objective of the three new 908s will be to recover the trophy which the team won in 2009.

Our programme is geared towards Le Mans 24 hours 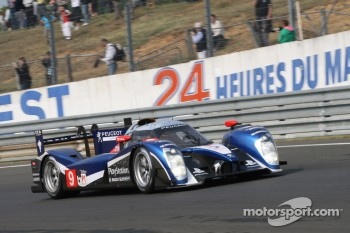 Coming to terms with this unique circuit is an incredible challenge which calls for meticulous, rigorous planning. The drivers, cars and technicians are subjected to an unrelenting test for the duration of the event which just has to be the toughest in the world. Peugeot has won Le Mans on three previous occasions: in 1992 and 1993 with the petrol-fuelled 905, and in 2009 with the diesel 908 HDi FAP. These successes enabled the brand to showcase the benefit of technologies which also feature on its road cars. Peugeot’s wide-ranging commitment to motorsport allows it to promote its values worldwide and the entire company shares the emotions which Peugeot Sport’s activities inspire.

“Our programme is geared towards this one race,” says Olivier Quesnel, the Director of Peugeot Sport. “Le Mans is magical; a legend; a myth, endurance’s racing’s Everest. It is a competition apart where nobody can afford to take anything for granted. That’s what makes defeat so cruel and victory such an elating experience. Just as we do every year, we have done everything in our power to arrive at Le Mans with the most competitive car possible and a fully-prepared team. We know that anything can happen in this race and we will need to produce a faultless display if we are to be first past the flag on Sunday afternoon.”

The early life of the Peugeot 908

To prepare for the new 2011 regulations that were due to come into effect, Peugeot Sport’s technical staff started to work on the current car immediately after the team’s victory at Le Mans in 2009. The following July, the main lines of the newcomer’s design were agreed and the V8 HDi FAP engine roared in anger for the first time on the bench at the team’s base in Vélizy, near Paris, on January 25, 2010. Six months later, on July 29, 2010, the car that would be unveiled as the ‘908’ on February 3, 2011, made its track debut at one of the PSA Group’s test circuits.

Since then, the Peugeot 908 has taken part in 15 test sessions, including seven endurance runs, clocking up some 45,000 kilometres. Venues visited included Aragon, Le Castellet, Monza, Sebring, Magny-Cours and Le Mans. The 908 has also contested two races: the 12 Hours of Sebring and, as a final dress rehearsal, the Spa-Francorchamps 1,000km, on May 7. The Belgian classic saw the 908 claim its first outright win and the first one-two finish of its career.

Our programme is geared towards this one race.

“Our car was above all designed for Le Mans,” underlines Bruno Famin, Technical Director. “It was competitive out of the box, and our priority throughout its development was to optimise its reliability. I believe we are close to achieving that objective, but you can never control absolutely everything in a race like the Le Mans 24 Hours. Every edition produces its share of surprises, and our hope is that we will have fewer surprises than has been the case in recent years, despite the fact that the 908 is an all-new car.”

Judging by the 2011 season’s early races, the gap compared with the competition is particularly narrow and the changes made to the regulations shortly before Le Mans week are likely to produce an extremely close-run fight. “We don’t know who will be the fastest in practice. To get an accurate idea of how we compare in terms of performance, we will need to wait until the first stint of the race on Saturday afternoon,” observes Bruno Famin.

“We have always kept to our game plan by remaining focused on our preparations and objectives, without monitoring and analysing what our opponents have been up to,” insists Olivier Quesnel. “At the pre-Le Mans test day on April 24 we stuck to our programme, and the same will apply during the two days of practice during race week, because once the race is underway we will need to be in a position where we can fight for the win. We are aware that even the slightest mistake at Le Mans can be extremely costly, whether it involves the drivers’ job out on the circuit, our car or our pit-stop work. For that reason, we will need to produce an impeccable performance, in every domain. That is the mission for which we have prepared, but it’s a long, long way to the chequered flag.”

The Peugeot 908 in détail

Bruno Famin: “We opted again for a closed-cockpit because there is no difference between opened- and closed-cockpit cars as far as their aerodynamic performance is concerned. With regards to the engine, we have capitalised on our experience by opting for a turbocharged diesel V8. Its characteristics are very close to those of the last V12, while the ‘vee’ angle is 90 degrees compared with 100 degrees previously, in order to optimise balance. The 3.7-litre V8 HDi FAP delivers 550 horsepower. To counter this significant power deficit which stems from the 2011 regulations, it was necessary to rework the aerodynamic package in order to significantly reduce drag. Last but not least, we have worked closely with our partner Michelin to produce a specific range of tyres.” The latest car is the third-generation Peugeot endurance prototype to race at Le Mans after the 905 (1991 to 1993) and the 908 HDi FAP (2007 to 2010). 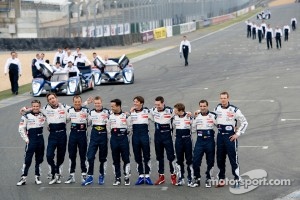 The nine drivers who form the Team Peugeot Total’s line-up are the same as those who raced for the team in 2010, and they count among endurance racing’s very best. Throughout the past 12 months, they have been actively involved in the testing programme. They have also contested two races since the beginning of 2011 and attended a series of physical fitness programmes in Toulouse, which culminated in a final, open-air team-building week in Chamonix! “They know each other very well,” says Pascal Dimitri, Team Manager. “However, it is vital that they work and spend time together away from the racetrack a little. Forging a solid bond between them is primordial. Despite their strong individual characters, they form a very united squad.”

Peugeot 908 N°7 (blue mirrors) : Alexander Wurz (AUT) – Marc Gené (ESP) – Anthony Davidson (GBR)
Alexander Wurz is the Peugeot driver who has enjoyed the most success at Le Mans. His four starts to date have harvested two wins: in 1996 with TWR, and in 2009 with Peugeot. The Austrian is still the youngest ever driver to have won Le Mans.

Spaniard Marc Gené won in 2009 at third attempt after claiming second place in 2008.

Anthony Davidson joined Team Peugeot Total in 2010. This will be the Briton’s fourth participation in the Le Mans 24 Hours.

His team-mates Nicolas Minassian and Stéphane Sarrazin have contested the French race 11 and 9 times respectively and have been stalwarts of the Peugeot Sport line-up ever since its return to endurance racing in 2007.

Portugal’s Pedro Lamy will be racing in La Sarthe for the 12th time. His best result to date was second overall in 2007 with the Peugeot 908 HDi FAP.

The youngest member of the squad is Simon Pagenaud who has rapidly carved out a reputation for himself in endurance racing both in Europe and in the USA. This will be his fourth participation.

In addition to these nine drivers, the team’s reserve driver is Jean-Karl Vernay. Team Peugeot Total’s latest recruit completed the 10 mandatory laps at the pre-Le Mans test day on April 24 in order to be ready to step in if required.

Finally, a fourth Peugeot will contest this year’s Le Mans 24 Hours, namely the 908 HDi FAP which is run by Team Oreca-Matmut. The 2011 12 Hours of Sebring winners Panis/Lapierre/Duval will be an additional asset 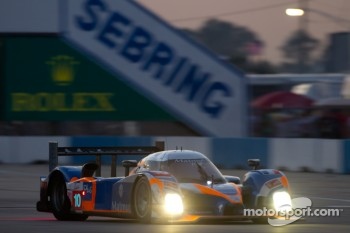 After March’s 12 Hours of Sebring (USA) and early May’s Spa 1,000km (BEL), Peugeot enjoys a 17-point lead at the top of the provisional Manufacturers standings, while Team Peugeot Total tops the Teams’ order by eight points. “Our primary aim is to win Le Mans which is the most prestigious race in the world,” stresses Olivier Quesnel. “However, we will do all we can to defend our ILMC crown, too.”

After Le Mans, which will earn double points, the calendar features four more races: Imola (ITA) at the beginning of July, Silverstone (GBR) in September, Petit Le Mans (USA) in October and Zhuhai (CHI) in November.