One-Two for the Peugeot 908s

With an impressive combination of performance, reliability, fuel economy and tyre management, the Peugeot 908s dominated the 6 Hours of Imola. Starting from pole position, Sébastien Bourdais and Anthony Davidson celebrate their first race together in the no.7 with a superb win. They finished ahead of Franck Montagny and Stéphane Sarrazin, who ensured the 908 racked up another one-two to go with the one achieved in the 1,000km of Spa. Peugeot therefore extends its lead in the ILMC Manufacturers’ standings.

Our car has a lot of potential and we have nothing to fear from our rivals.

Peugeot extends its lead in the ILMC

Top of the Manufacturers’ standings after the first three rounds of the Intercontinental Le Mans Cup (Sebring, Spa and Le Mans), Peugeot lined up at the start of the 6 Hours of Imola looking to consolidate its lead. With pole position and a one-two in the race, Peugeot scored maximum points and extended its lead to 43 points.

On a narrow track, which is fairly short considering the 49 cars taking part, it looked however like a tough task lay ahead for the team and the drivers. In the end, the much feared safety periods failed to materialise, as the race remained free of major incidents. The race was run in normal conditions, and came down to the pure performance of the cars and the drivers. The quickest driver team of the weekend – having claimed pole position and the fastest race lap – Bourdais and Davidson secured a dominant win ahead of Montagny and Sarrazin, who were in contention for the win until the team decided to maintain the positions, with less than an hour of the race to go.

“This one-two is good for the whole team. As is often the case in endurance, the win came down to performance, reliability and fuel economy”, emphasized Bruno Famin as he climbed onto the podium. “In particular, we managed to complete a triple stint with the same tyres, at a pace that was higher than our rivals. That was the point at which we really took control of the race. For the fourth time in as many races this season, we can be pleased that all our cars made it to the end of the race, with an excellent level of reliability.”

Starting from pole, Sébastien Bourdais (Peugeot 908 no.7) headed the 48-strong field into the first corner. The race order remained the same as in qualifying, with Fässler (Audi no.1), Montagny (Peugeot 908 no.8) and McNish (Audi no.2) all tightly bunched. After six laps, the leaders began to run into the first backmarkers. The race was being run at the same relentless pace as at the 24 Hours of Le Mans, with the drivers constantly pushing. 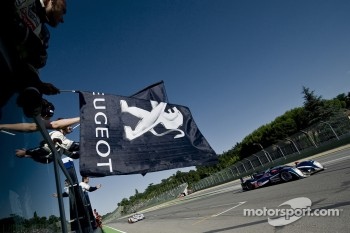 Just after his first refuelling pit stop, Franck Montagny grabbed second place from Marcel Fässler with an audacious overtaking manoeuvre: “I really enjoyed driving the car! It wasn’t easy to overtake because the track was very dirty off the racing line. There was just enough space to get past Marcel on the outside of Tamburello, but I made it past!”

At the front, Sébastien Bourdais was also pushing hard. Demonstrating the performance of his 908 and the Michelin tyres, the man from Le Mans improved his fastest race lap towards the end of his second stint, just before handing over to Anthony Davidson. As they attempted to negotiate a pit lane that was both narrow and congested, the no.7 driver team lost around thirty seconds and with it, the race lead, during this pit stop. “I couldn’t stop in front of our pit garage and we had to push the car backwards", explained Sébastien Bourdais. “It's a bit frustrating to lose time that we had fought hard to gain on the track, but both Peugeots stayed in the lead, and that's the most important thing.”

Back on the track 24 seconds behind Stéphane Sarrazin, Anthony Davidson produced some inspired driving in the traffic. The British driver quickly narrowed the gap to his team-mate and the two Peugeot 908s completed several laps nose to tail.

Anthony Davidson took back the lead after his first refuelling pit stop. Just like Stéphane Sarrazin, he completed a triple stint at a higher pace than that of the Audis. The Peugeots put themselves out of reach when they moved one lap clear, just before the race's halfway stage. “I came together with Tom Kristensen when I overtook him”, said Anthony Davidson. “Competition is always close and I had been expecting a strong reaction from him. As I was on the inside of the corner, his attempt to hold me off forced him into the gravel and it didn’t affect my race at all…”

Drama towards the end of the race

The race almost saw a dramatic twist on two occasions: at 4.50pm, a collision between the Peugeot 908 no.7 and a backmarker left the former with a puncture on the rear left tyre. Sébastien Bourdais came into the pits and lost the lead to Franck Montagny. A few minutes later, the Peugeot no.8 had to stop for the same reason, a puncture caused by a collision. Montagny had to relinquish the lead again to Bourdais. Team Peugeot Total decided to maintain the positions and controlled the final few pit stops, enabling the level of fuel to be adjusted to ensure both cars made it to the end, to see out another Peugeot 908 one-two.

Olivier Quesnel: “We had all the right ingredients today: a very fast car which used less fuel than its rival, a team that came up with the perfect race strategy and a group of exceptional drivers. And we didn’t disappoint in terms of the result with a resounding one-two. We returned to the same kind of performance level and times as those witnessed in early May at the 1,000km of Spa, a race that was run in similar weather conditions. This perfect result means that we have clear at the top of the overall standings. We can manage our lead in the final three races, except in Zhuhai where winning is a significant goal for us.” 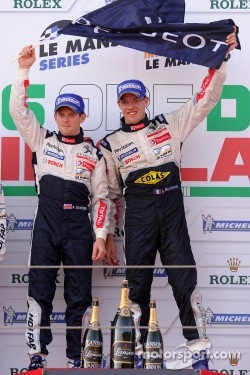 Bruno Famin: “It feels good to have dominated the race in all areas: fuel consumption, tyre management and out-and-out performance. We worked hard in free practice to adapt the set-up of the car on this track, where we were making our first appearance. The drivers managed to make very good use of the cars during the race. This result confirms the trend seen at Spa. Our car has a lot of potential and we have nothing to fear from our rivals.”

Sébastien Bourdais (Peugeot 908 no.7): “I am very pleased to win my second race with Peugeot. I got on really well with Anthony, who was the quickest driver this weekend. Right from the word go, we found a set-up that worked for us both. The race was not without incident, but nothing that could stop us from winning and securing a one-two.”

Franck Montagny (Peugeot 908 no.8): “What could be better than to win a race after Le Mans? Once again, both our cars have completed the race, and this time in the top two places. I am proud to be part of this team. We had an excellent level of performance but were a little surprised to be so far ahead of our rivals. We know they are going to work hard to bounce back next time. There will be other great scraps to come.”

Stéphane Sarrazin (Peugeot 908 no.8): “What will stay with me most of all is the one-two for Peugeot, it’s fantastic for the entire team. We have to admit we had a slightly harder time that our team-mates. Anthony was very quick all weekend, he did a great job. I think the best team won.”

Anthony Davidson (Peugeot 908 no.7): “This is my fourth win with Peugeot. It was an incredibly difficult race for all the drivers. I can hardly believe that the safety car didn’t come out once in six hours of racing! We expected the fight at the front would be closer, but we had a fantastic car. It worked out very well with Sébastien, we complemented each other.”