Three Peugeot 908s are set to race at the 24 Hours of Le Mans circuit for the first time as part of the day of testing scheduled on 24 April. Back on the race calendar after a two-year absence, this day of testing will provide Team Peugeot Total with the change to run a specific test programme on this unique racetrack.

Our number one priority this season is the 24 Hours of Le Mans.

The one and only Le Mans racetrack

Sunday, 24 April 2011, will see the new Peugeot 908 take on the 13.629-kilometre long track, featuring some of motorsport's legendary stretches of track Tertre Rouge, the Mulsane Straight, the Mulsane Corner, Indianapolis or Arnage, to mention just a few and which form part of Peugeot's rich sporting history.

The three Peugeot 908s' nine drivers have a busy schedule ahead of them. Anthony Davidson, Marc Geni, Alexander Wurz, Nicolas Minassian, Franck Montagny, Stiphane Sarrazin, Sibastien Bourdais, Pedro Lamy and Simon Pagenaud will take it in turns to drive the three cars during the day of testing.

The information gathered during the various test sessions and at the 12 Hours of Sebring will therefore be compared with the constraints of the 24 Hours of Le Mans track. "We have been driving on tracks that mimic certain aspects of what we will find at the 24 Hours of Le Mans, but there is no real equivalent to the Le Mans circuit", says Bruno Famin, Peugeot Sport's Technical Director. "Being able to take part in this test day is essential when we are entering a brand new car, as is the case this year. The disassembly of the Peugeot 908 after Sebring was enlightening. Since then we have pursued our programme by taking part in a series of test sessions in Monza, Le Castellet and Aragsn. For the test session on 24 April, the programmes of the three cars will focus on three key areas: tyres, aerodynamics and mechanical set-up. 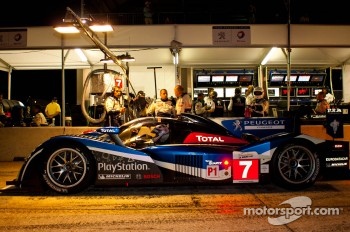 Team Peugeot Total has opted to run three Peugeot 908s on 24 April. "When the Peugeot 908 HYbrid4 was presented at this year's Geneva Motor Show", continues Bruno Famin, "We stated that our ambitious goal was to run the car at the test session. When it came to making a decision, we considered that the car wasn't sufficiently mature to run it in satisfactory conditions in terms of reliability. In order to prepare as effectively as possible for this year's 24 Hours of Le Mans, all the energies of the Team Peugeot Total shall therefore be focussed on the three conventionally-powered 908s".

"We are enthusiastic about this innovative technology one in which Peugeot is a leader and which represents an important step forward in terms of improving car efficiency", concludes Olivier Quesnel, Peugeot Sport Director. "The project continues to make progress. Our number one priority this season is the 24 Hours of Le Mans. We need to focus all our energies on winning this race with our brand new Peugeot 908. We have got a day's testing on this track to gather as much information as possible. Every kilometre completed by our drivers will be useful in ensuring we come back for the race in June as well prepared as we can be."

The disassembly of the Peugeot 908 after Sebring was enlightening.

A group photo session is scheduled for Saturday 23 April, starting at 2pm in the pit lane, with the entire Team Peugeot Total, the three Peugeot 908s and the nine drivers. Anthony Davidson, Marc Geni, Alexander Wurz, Nicolas Minassian, Franck Montagny, Stiphane Sarrazin, Sibastien Bourdais, Simon Pagenaud and Pedro Lamy, as well as Olivier Quesnel and Bruno Famin will then be answering questions from the des media from 4.30pm in the Peugeot motorhome. On Sunday, 24 April, eight hours of testing are scheduled, from 9am to 1pm, and then from 2pm to 6pm.

Follow all the action from the test: www.peugeot-sport.com Live timing: www.lemans.org