After an incredibly close race, the outcome of which was not decided until the chequered flag, the 79th edition of the 24 Hours of Le Mans is set to go down in history as a classic. In front of a 249,500-strong crowd, all three Team Peugeot Total cars made it to the end. After an exciting and incident-packed race, the driver team of Bourdais/Lamy/Pagenaud (Peugeot 908 no.9) finished only 13.854 seconds behind the winner.

Peugeot at the centre of a truly unforgettable race

The high point of the endurance season, the 24 Hours of Le Mans was Team Peugeot Total’s main objective. After having completed meticulous preparations for the race and shown the potential of the 908 during what was a very closely-fought qualifying session, the team brought its three cars out onto the starting grid early on Saturday afternoon. Philippe Varin, Chairman of the PSA Group Management Board, was on hand to offer his support to the team: “All of Peugeot is behind this team. The 908s symbolise the brand’s high level of excellence.”

“The die is cast, we are set for a magnificent duel between two great manufacturers”, summarised Olivier Quesnel. “We feel that we have done a good job. But this is sport, and the outcome will now be decided out on the track”, added Bruno Famin.

Throughout the 24 hours of the race, the Peugeot 908s demonstrated the performance level and reliability of their cars. Twenty four hours at an incredible pace, without any let up for mechanics or the drivers, twenty four hours that held the attention of hundreds of millions fans, TV viewers and web users.

“We came here to win and we have finished second. My first feeling has therefore to be one of disappointment”, acknowledged Olivier Quesnel. “However, the team can be proud of having prepared three totally reliable cars and having produced a faultless performance from a technical point of view. Our drivers just kept pushing, like Simon Pagenaud who only was only around ten seconds behind the leader with a quarter of hour to go. For this 24-hour long sprint, we only a little bit of performance for there to have been a different outcome to the race. I would like to congratulate our rival on their win today. We both fought for the win in a genuinely sporting manner, with a lot of mutual respect.” 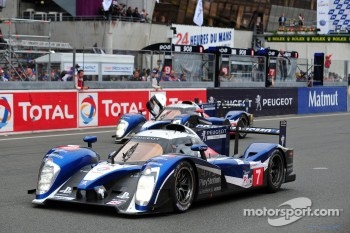 The reliability of the Peugeot 908

On the podium at the 12 Hours of Sebring, a one-two at the 1,000 kms of Spa-Francorchamps, the Peugeot 908 had been developed with the objective of winning again at the 24 Hours of Le Mans. By placing its three cars in 2nd, 3rd and 4th positions, Team Peugeot Total demonstrated the reliability of its new machine.

Due to the optimised fuel consumption of the V8 HDi FAP, the Peugeot Sport engineers enabled the 908s to complete 12-lap stints. In the middle of the night, the drivers were able to put together fourstint shifts behind the wheel with the same set of Michelin tyres.

“In terms of reliability, we met our objective”, commented Bruno Famin, Peugeot Sport’s Technical Director. “The race was decided on performance. We suffered from a slight lack of performance, especially with the hard compound tyres. That was enough for our rivals to gain the upper hand.”

When Jean Todt got the 79th edition of the 24 Hours of Le Mans underway, the 249,500-strong crowd were treated to a race start worthy of a sprint, epitomised by the duel opposing Franck Montagny in the Peugeot 908 no.8 and Allan McNish in the Audi no.3. At 15:51, the Audi no.3 clashed with a backmarker, going off the track in a spectacular crash. The safety car was brought out for over an hour. At that point, Franck Montagny (no.8), Alexander Wurz (no.7) and Sébastien Bourdais (no.9) were grouped together in the 3rd to 5th places. The Peugeot 908 no.8 lost several seconds during the safety car period, as the mechanics spent time resolving a problem with the brake distribution system.

When the race resumed, Alexander Wurz decided to go on the attack and managed to grab second position. Owing to the staggered pit stops of the frontrunners, the Austrian took the lead for the first time on lap 37. Driven along at relentless pace by the five frontrunners, all on the same lap, the lead continued to change hands until 22:41, when the Audi no.3 suffered a frightening accident after coming together with another car on the Indianapolis corner and crashing in the barriers. The safety car was brought out for 2.5 hours whilst the safety barriers damaged in the accident were repaired.

Genuine slaves to the track, Sébastien Bourdais and Simon Pagenaud in the no.9, Stéphane Sarrazin in the no.8 and Anthony Davidson in the no.7 racked up the three- and four-stint shifts behind the wheel throughout the night. With soft tyres fitted and sticking to a set programme of 12 laps per stint – compared with 10 or 11 for their rival – the Peugeot 908s proved to be very effective in these conditions. The no.9 became the spearhead of Team Peugeot Total, which kept up the constant pressure on the leader. 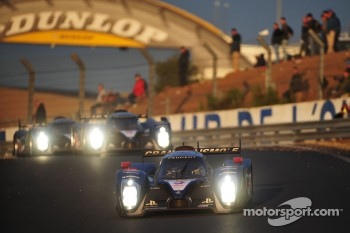 Sunrise saw a short, third safety car periods (following a crash). The battle between the potential winners reached its climax, with the 908 no.7 and no.9 and the Audi no.2 grouped together, until they all came into the pits at the same time. The no.8 fell back, especially after being handed a oneminute stop-and-go penalty. At 09:44, Alexander Wurz got his braking wrong and ran into the tyre wall at the Indianapolis corner. The two-time winner at Le Mans managed to get back to the puts, where the mechanics replace the car’s front right half-axle in 9 minutes. The no.7 came back out on track in 4th position, four laps adrift of the leaders.

As forecast, fine rain began to fall at around 11am. Thanks to making the right choice of tyres, Peugeot Sport engineers help Simon Pagenaud to close to within 30’’ of André Lotterer.

The end of the race looked on course to be a head-to-head fight between the two men. At 14:24, both cars dived into the pit lane at the same time for a final stop. Pagenaud kept his Michelin tyres, whereas Lotterer opted to put on a new set of tyres. The two leaders came back out separated by less than ten seconds! Taking full advantage of his fresh tyres, Lotterer pulled away a little as the laps went by, and went on to clinch the win. Peugeot’s three 908s finished in second (no.9), third (no.8) and fourth (no.7) positions. The Peugeot 908 HDi FAP run by Oreca rounded off the top five of one of the closest ever editions of the 24 Hours of Le Mans.

Boosted by the double points on offer for the ILMC standings, the 24 Hours of Le Mans enable Peugeot to increase its lead in the Constructors’ standings. The next round will be held in Imola (Italy), on July 1-3. Team Peugeot Total will be entering two cars for the race.

We have played our part in a classic race in the history of the 24 Hours of Le Mans, and that’s positive for Peugeot.

Olivier Quesnel, Peugeot Sport Director: “We have played our part in a classic race in the history of the 24 Hours of Le Mans, and that’s positive for Peugeot. There was a lot of interest in and enthusiasm for this race, which is clearly why we are a little disappointed not to have won after 24 hours. Our rivals were a little bit quicker than we were in the conditions during the race, but we fought for the win right to the last minute. I am proud of this team.”

Bruno Famin, Technical Director: “It was a great adventure. All the ingredients for a classic race were there and the race did not disappoint in that respect. We are not happy with the result, of course, because we came here to win. Our rivals undoubtedly had a bit more performance, but we had other qualities. The race went away from us due to two or three details.”