One-Two For Peugeot Before Le Mans

Just a few weeks ahead of the 24 Hours of Le Mans, Peugeot recorded an encouraging one-two at Spa-Francorchamps, after an enthralling six-hour race. Alexander Wurz, Anthony Davidson and Marc Gené clinched the win in the no.7 car ahead of car no.8 drivers, Franck Montagny, Stéphane Sarrazin and Nicolas Minassian, who had started back in 48th position on the grid. Team Peugeot Total thus took another giant step forward in its preparation for Le Mans.

An incredible first hour of racing

With 34,600 spectators watching Saturday’s race at Spa- Francorchamps, the Peugeot 908s lined up well down the starting grid, but as soon as the race got underway, all three Team Peugeot Total cars showed they were not content to sit back. From 12th place, Alexander Wurz, in the Peugeot no.7, moved up to 3rd at the end of the first lap! Meanwhile, Sébastien Bourdais moved up to 4th spot in car no.9 and Franck Montagny, who started in 48th position, overtook an incredible 38 cars in one lap!

When I saw that we were the quickest on the track, that really motivated me. I put my rivals under pressure and managed to take into the lead!

Alexander Wurz was flying as he grabbed second spot thirty minutes into the race. The Austrian then closed right up on the tail of race leader Lotterer and managed to get past him just before the first refuelling pit stop after a superb overtaking manoeuvre in traffic.

Things were going as well for his team-mates with Sébastien Bourdais, who handed over the no.9 Peugeot 908 to Pedro Lamy with the car in 4th position Meanwhile, Franck Montagny was lapping in a superb 5th place as he handed over to Stéphane Sarrazin.

The three Peugeots at the front

The race gradually took shape and the consistency of the Peugeots enabled the three 908s to hold the top three positions after 2.5 hours of racing, showing their competitiveness. Anthony Davidson, Pedro Lamy and Stéphane Sarrazin maintained an unrelentingly high tempo, thus widening the gap to their rivals.

The Peugeot 908 no.7 held onto first place until the next round of refuelling pit stops. Marc Gené, and then Alexander Wurz again, just kept on pushing right to the end of the six hours of racing, without experiencing any issues.

Behind them, the scrap for the remaining podium places was intense. Pedro Lamy was the only driver to complete three stints. The Portuguese driver made a costly error at the end of his stint, allowing the Peugeot no.8 to take second place. Simon Pagenaud took over from Lamy but had to come into the pits 30 minutes from the end to change the front right half-axle. The driver team of Bourdais-Lamy-Pagenaud finished eighth, but also claimed the fastest race lap.

Fifth win at Spa-Francorchamps for Peugeot 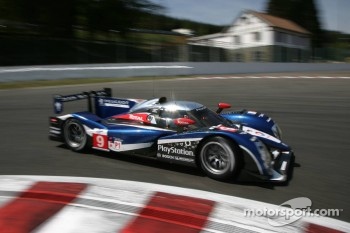 After six hours of intensive racing, Team Peugeot Total secured an important one-two looking ahead to this year’s edition of the 24 Hours of Le Mans. So, for the fifth year running, a Peugeot wins the 1,000 Kilometres of Spa-Francorchamps. Alexander Wurz, Anthony Davidson and Marc Gené will go down in the record books as the first drivers to win a race in this new Peugeot 908. “What perfect timing for this, our fifth consecutive win at Spa, the first victory of the Peugeot 908 and our first win of the season in ILMC”, commented Olivier Quesnel, Peugeot Sport Director. “Practice sessions and tests are there to test the cars and not necessarily to produce performances; the race itself is a more representative test. The race went just as we had planned. We were reliable and performed well, whilst also managing fuel consumption and tyre wear. We have won a round without being favourites, but we still have a huge mountain to climb.”

Thanks to this second one-two in ILMC, Peugeot has extended its lead in the Constructors’ standings. Team Peugeot Total has also moved to the top of the teams’ standings.

Bruno Famin, Technical Director: “The test day at Le Mans in April was a real working session for us, we completed our programme without paying any attention to our rivals. It was the same thing here during free practice. Our aim for the Spa race was very much the same: prepare for Le Mans, but here there was also a sporting stake. We had to get a good result. We weren’t sure whether we’d be able to go after the win, but we worked as hard as we could and the result came of its own accord, thanks to the fine performances of our drivers. This result is a boost for the confidence of the team, but our confidence is contained and reasoned, because the gaps are small. Le Mans will still be a difficult and complicated race.”

This result is a boost for the confidence of the team, but our confidence is contained and reasoned.

Alexander Wurz, Peugeot 908 no.7: “My first stint went very well. I quickly realised how efficiently our car was performing. When I saw that we were the quickest on the track, that really motivated me. Whilst also looking after my tyres, I put my rivals under pressure and managed to take into the lead! From that point onwards, everything went perfectly. This is an important win in our preparations for the 24 Hours of Le Mans.”

Anthony Davidson, Peugeot 908 no.7: “When I saw the pace set by Alex, I realised we had a car that could win the race. It was very comfortable to driver and this is a track that I really like. My engineer asked me to push 100%, which is what I did. We had a good strategy, and we didn’t have any issues at all. It’s positive before Le Mans.”

Marc Gené, Peugeot 908 no.7: “The main thing we have learned from this race is that the 24 Hours of Le Mans is going to be a very hotly contested race. It looks set to be the most open race in the last five years. This is a great result, but Spa is nothing like Le Mans. We showed how efficient and reliable the car is today.” 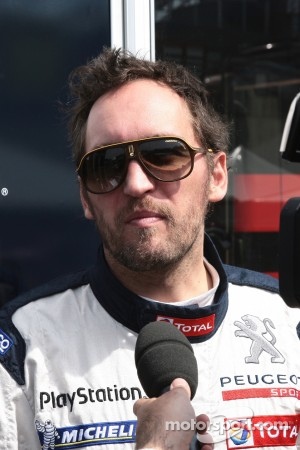 Franck Montagny, Peugeot 908 no.8: “My stint was complicated because I had to overtake a lot of people. I couldn’t drive at the same pace as the other due to the traffic and I used up the tyres quite a bit, so the balance was odd at the end of the stint.”

Stéphane Sarrazin, Peugeot 908 no.8: “I am pleased with my two stints. The balance of the car is good and constant. The safety car period lost us around forty seconds, but in the end, I pretty much made up the time lost on the track. We have made a lot of changes to the car throughout the week. This result means we head for Le Mans even more motivated than before.”

Nicolas Minassian, Peugeot 908 no.8: “We all had slightly different set-ups, but we managed to preserve our tyres very well. We have collected valuable information for the 24 Hours of Le Mans. After complicated qualifying, we are back at the front again.”

Sébastien Bourdais, Peugeot 908 no.9: “We were expecting to be able to move up the field once the race got underway, but it was a pleasant surprise to see we were keeping pace with our main rivals. I started on soft tyres, so I had to be easy on them to complete two stints on the same set of tyres.”

Pedro Lamy, Peugeot 908 no.9: “There was a lot of traffic on the track, so when you have a clear lap, you take risks and push hard. That’s what I did, and I went off. It’s a shame because we were looking good for a one-two-three. This is a test race for Le Mans; we need to learn from our mistakes and take the positives from our problems.”

Simon Pagenaud, Peugeot 908 no.9: “I gave my all to finish on the podium. It was looking good, but unfortunately, we had a technical problem. It’s a shame as our car was really good, as proven by the fastest race lap we set at the end of the race. All of that is encouraging for Le Mans.