Pilet puts the Flying Lizard No. 79 on GTE Am Pole

Patrick Pilet puts the Flying Lizard No. 79 on GTE Am Pole for 24 Heures du Mans; No. 80 Seventh in GTE Pro 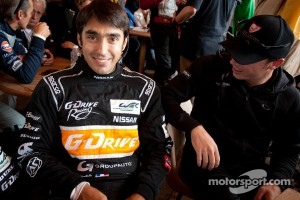 June 14, 2012 – Midnight CET – Circuit de la Sarthe, Le Mans, France – Porsche factory driver and French national Patrick Pilet set the fastest time in GTE Am this week over the three qualifying sessions for the 24 Heures du Mans. The time of 3:57.594, set in the first qualifying session Wednesday afternoon, was the fastest in GTE Am and the No. 79 of Pilet, Seth Neiman (USA), and Spencer Pumpelly (USA) will start on the pole for Saturday's race. The No. 80 Porsche of Joerg Bergmeister, Patrick Long and Marco Holzer will start seventh on the GTE Pro grid.

Pilet commented, "The team did an excellent job preparing the car for quali. When I drove the Porsche on Wednesday it was very balanced; we were able to make some small adjustments in the morning session, then in qualifying, with new tires, I was able to push for my fast lap. Everything has been well planned and we've had few problems. In Thursday's sessions we were able to make sure everyone had enough seat time; we accomplished everything we needed to do over the two days."

The No. 80, which used the Wednesday qualifying session for race setup, encountered bad luck Thursday when a driveline component failed during the second qualifying session. The No. 80 was back out again quickly following the repair, but returned to the garage shortly after for the crew to replace the accelerometer, which was required for optimal traction control. Chief strategist Thomas Blam commented, "The issues at the start of the Thursday session definitely set us back. We had planned on going for our qualifying time in the third and final session, but instead had to continue working on our race setup. However the drivers are pretty happy with the balance of the car and feel that we'll have a solid racecar for the weekend."