The ORECA 03 of team ADR Delta will start from the pole in LMP2 class. Five ORECA chassis in the top 6. 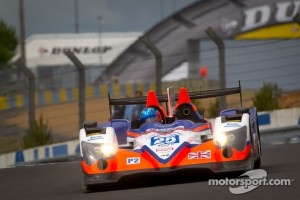 At the end of intense qualifying sessions spread over two evenings, the grid for the 80th edition of the 24 Hours of Le Mans was finally decided. As ruthless as ever, the night sessions, less than two days from the start, are full of pitfalls to avoid. In LMP2, the ORECA 03 cars accomplished this mission by taking five of the top six places, including pole, signed by John Martin for ADR Delta. Despite a busy end of session, Team Signatech-Nissan takes third, followed by Thiriet by TDS Racing, just a tenth off.

Since their discovery of the famous Circuit de la Sarthe during the Test Day, ADR Delta, current FIA World Endurance Championship leaders, seem to have dialed in the settings for this unique track. Continuously progressing since the start of the season and taking another pole position after the 6 Hours of Spa in May, the British team are confirming their ambition. Author of this superbe laptime (3:38.181), John Martin looks ahead to the race : « I’m not unhappy, but the most important is to stay focused on the race. It’s encouraging for my first time at Le Mans, but we must keep on. Jan (Charouz) is a valuable teammate who knows this track and event well. He isn’t hesitating to share his experience with us, and for us that’s a real plus. We have a good car so I’m confident. But Le Mans is like none other. This pole is a good beginning! » His teammates, Tor Graves and Jan Charouz are also happy with the result which places them 12th overall on the grid.

Team Signatech-Nissan slides into third place with the No. 26 of Pierre Ragues, Nelson Panciatici and Roman Rusinov. Philippe Sinaut, team manager, looks back at the two sessions : « Although I’m not a big fan of these night sessions – because in one lap you can ruin all chances to be in the race – these qualifying sessions allowed us to complete the work we set out for ourselves. On the No. 26 we had the time to work on performance whereas on the No. 23 we worked on the race configuration. Our position on the grid is alright and, over 24 hours, it’s consitency that will pay off. Tomorrow we recondition the cars because the big day will be Saturday ! »

At Thiriet by TDS Racing, after dominating the first session, Pierre Thiriet, Mathias Beche and Christophe Tinseau end the evening fourth in LMP2. Author of the fastest time the night before, Mathias Beche is optimistic: « We have the potential do so something good. We just needed a clean lap and a little luck to pull one out of our hat…We put it all together last night, but not tonight. That’s part of the game, and Le Mans! The car is well balanced and we ran a lot without having the slightest problem. We are confident for the race and above all happy to be here! »

In the wake of the French team, the Argentine entry Pecom Racing reiterated their good result from the Test Day. Despite a quick spin without consequence at the Ford Chicane for Soheil Ayari, he and teammates Pierre Kaffer and Luis Peres Companc put together a string of solid times that show good potential for the race.

Completing the group of ORECA 03, Murphy Prototypes finished 6th in class after a brilliant first session on Wednesday. Jody Firth, Brendon Hartley and Warren Hugues continued their setup work by taking care of small imperfections. Very consistent, the No. 48 will have a card to play for the race.

At Boutsen Ginion Racing, a few worries interrupted their session. After changing the diffuser yesterday at the end of the session, Bastien Brière, Jens Petersen and Shinji Nakano were unable to improve their time today. Meanwhile, Race Performance had an up and down session but will start in the 16th position nonetheless.

Saturday, June 16 at 3p.m. at the 24 Hours of Le Mans circuit for the start of the legendary twice around the clock event. ..