Kamui Kobayashi put Toyota on top of the times in a rain-hit, red-flagged opening practice session for the Le Mans 24 Hours, 1.8 seconds ahead of the best of the SMP Racing LMP1s. 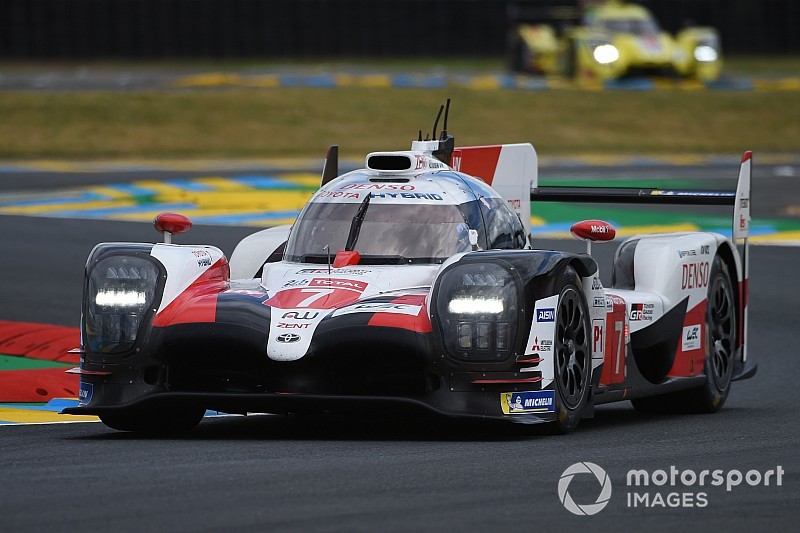 Kobayashi hit the front with less than two minutes of the four-hour session remaining, clocking a 3m18.091s aboard the TS050 Hybrid he shares with Mike Conway and Jose Maria Lopez to deny the #11 SMP crew top spot.

Stoffel Vandoorne had put SMP's #11 BR Engineering BR1 top with 20 minutes remaining, but his time ended up 1.840 seconds shy of Kobayashi's on a rapidly drying track.

Ex-McLaren Formula 1 driver Vandoorne's 3m19.931s time was a mere 0.029s faster than that set by Gustavo Menezes, whose 3m19.960s lap in the Rebellion R-13 he shares with Thomas Laurent and Nathanael Berthon had stood as the benchmark for much of the session.

Menezes posted that effort moments before a red flag was shown when GTE Am driver Tracy Krohn crashed the #99 Porsche 911 RSR an hour and 40 minutes into the session.

Krohn had a hefty shunt on the run between the second chicane and Mulsanne corner, leaving a significant amount of debris across the track - delaying running by around 45 minutes.

An update from the FIA World Endurance Championship via Twitter said Krohn had been taken to hospital for precautionary checks but that he was "conscious and in good spirits".

The length of the delay allowed a heavy rain shower to hit the circuit before the session restarted, but in the final hour the sun broke through the clouds and helped dry the track.

The second Toyota ended the session fourth thanks to a 3m20.941s lap set by Fernando Alonso, who was the first driver from the #8 car's line-up to take to the track.

Kazuki Nakajima looked on course to improve on that time with his final lap, but his effort was thwarted by a yellow flag being shown in the final sector caused by Erwin Creed's spinning #50 Larbre Competition Ligier.

The #1 Rebellion was fifth with Andre Lotterer at the wheel, 3.166s off the pace, ahead of the #17 SMP car of Sergey Sirotkin.

DragonSpeed's Gibson-powered BR1 and the ByKolles ENSO CLM P1/01 brought up the rear of the LMP1 order, lapping 6.355s and 9.752s off the pace respectively.

LMP2 was topped by the IDEC Sport Oreca of Paul-Loup Chatin, who set the fastest time in class - a 3m28.363s - late on, beating the DragonSpeed Oreca of Pastor Maldonado. 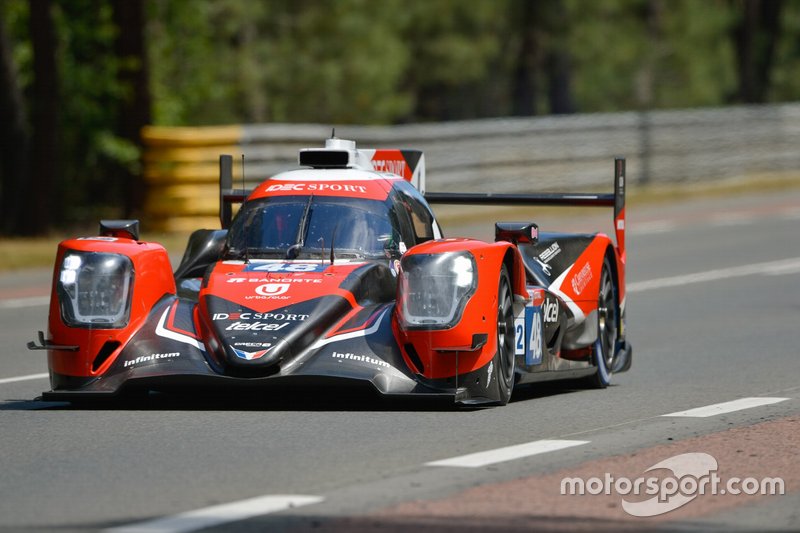 Jonathan Hirschi had been the first driver to break under the 3m30 bracket in the #39 Graff Oreca, but as track conditions improved, his time was beaten by both Maldonado and the #26 G-Drive Racing Aurus-branded Oreca of Jean-Eric Vergne, who ended up third.

Pierre Thiriet was another late mover in the #36 Signatech Alpine Oreca, bumping Nyck de Vries in the best non-Oreca – the #29 Racing Team Nederland Dallara – down to sixth in class.

The best-placed Ligier ended the session in seventh, as Filipe Albuquerque moved the #22 United Autosports car up the order in the dying moments after a spell in the garage having an engine oil pump replaced.

Porsche took a 1-2 in the GTE Pro division, with Michael Christensen's early lap of 3m52.149s in the #92 911 RSR surviving a late flurry of improvements to stand as the top time.

Mathieu Jaminet made a late jump up the order in the #94 Porsche, 0.315s off the pace of Christensen, while Sam Bird was third-fastest in the best of the Ferrari 488 GTEs, the #71 machine. 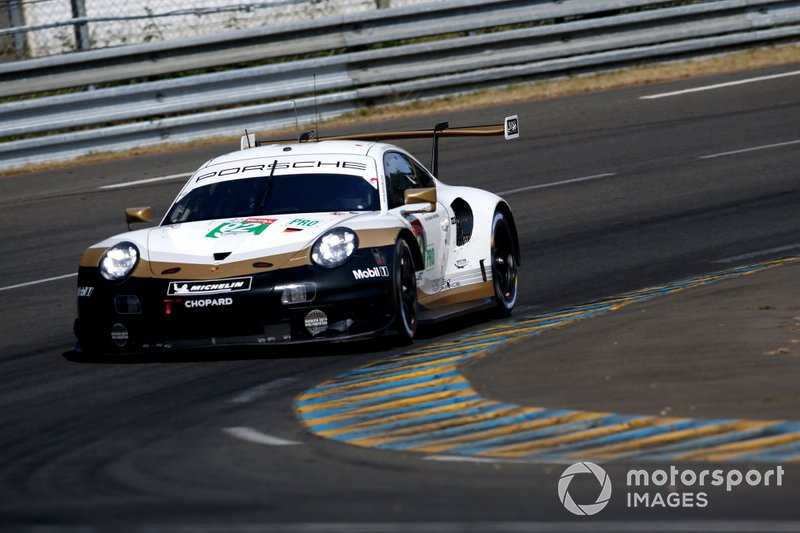 Stefan Mucke was the quickest of the Fords in fourth, having briefly gone second in the black-and-white retro-liveried #66 GT, ahead of James Calado in the second of the factory AF Corse-run Ferraris and Augusto Farfus in the top BMW M8 GTE.

The late improvements shuffled down the #67 Ford, which had been second at the red flag, all the way down to seventh, ahead of the remaining two Porsches and the top Corvette C7.R.

Aston Martin’s top Vantage GTE was 11th and 1.653s off the pace in Alex Lynn’s hands.

That was enough to beat the #54 Spirit of Race Ferrari of Giancarlo Fisichella by 0.382s, while Pedro Lamy was only another 0.028s behind in the #98 Aston Martin.