Swiss racing driver Harold Primat today completed one of the most challenging and prestigious races in the world – the 24 Hours of Le Mans. Despite the car having to spend almost an hour in the garage whilst the team fixed a broken clutch, the Rebellion Racing driver and his team mates took the chequered flag in third place in the FIA World Endurance Championship LMP1 Privateers class after 24 hours of non-stop racing. 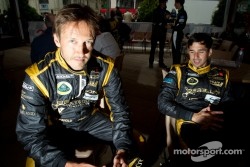 For the 80th running of this world-famous race, Harold and his team mates Andrea Belicchi and Jeroen Bleekemolen qualified the car in ninth position overall and second in the Privateers class during Wednesday and Thursday’s qualifying sessions.

On Saturday the team woke to heavy rain for the morning warm up session. With rain threatening the start of the race the opportunity to get some wet running was important. At the end of the 45 minute session the #13 Rebellion Racing LMP1 car was seventh quickest overall and the quickest in the Privateer and Petrol classes.

At 3pm local time Andrea Belicchi lined up on the grid to take the start for the #13 car. The rain stayed away but the track was still damp from the day’s rain so the team started on slick tyres. Andrea made a good start and after two hours of running was in P8 overall and second in the Privateer and Petrol classes behind the Rebellion Racing sister car.

Andrea came into the pits for the first driver change of the afternoon and Jeroen Bleekemolen headed back out on track in tenth position. After the first round of pit stops the #13 car was running strongly in P8 overall.

After two hours out on track Jeroen came into the pits to hand over to Harold. After half an hour out on track the #3 Audi retired from the race and elevated Harold to P7. Just 30 minutes later, and following a crash involving the Toyota of Davidson, the safety car was brought out and Harold was up to P6 overall. It took over an hour for the safety barriers to be fixed so Harold ran almost a quarter of his stint under safety car conditions. After the race went green again Harold had a strong run and after four hours on track had moved up to fifth place overall and second in the Privateer and Petrol classes before pitting and handing over to Andrea.

At 4am it was Harold’s turn for his second stint in the car. Despite running strongly in P5 overall Harold was suffering with visibility issues caused by a dirty windscreen and at the Porsche Esses touched one of the kerbs which caused the car to get a little loose and spin. Harold was able to catch the car and prevent it from making contact with the gravel or barriers and continued on in fifth position. After three hours of night running, including the tricky ‘sunrise’ stint, Harold came in to hand over to Andrea for his next stint.

At around 10am, with Jeroen in the car, the #13 was forced to pit from P5 with a clutch problem. The Rebellion Racing team was able to fix the broken clutch and send the #13 car back out but they had lost over half an hour in the pits and dropped to P11 overall.

With three hours left on the clock it was time for Harold’s final stint of the race. Harold was forced to deal with another safety car period during his final two hours on the track and at 1.45pm, and with just over an hour to go, Harold made the final driver change to Andrea who brought the car home after a tough 24 hours of racing in third place in the Privateer and Petrol classes and eleventh place overall.

“Le Mans is easily the toughest and most challenging motor race in the world for both the car and the drivers so to finish the race is an achievement in itself. But we didn’t just finish the race, we crossed the finish line in third place in the Privateers and Petrol classes and seventh place in the ultra competitive LMP1 class which is a strong result for the team;” commented Harold Primat.

“We were the only team to challenge the diesels of the Audi LMP1s after both Toyota LMP1s retired, which is something the team should be very proud of. The car was good during the race and without the clutch problem it is likely we would have finished fifth or sixth overall;” continued Harold.

“The result at Le Mans means the team still leads the FIA World Endurance Championship LMP1 Trophy for best Privateer Team and we will be hoping we can extend our lead in the Championship when we head to Silverstone in August;” continued Harold.

Flying Lizard No. 79 fourth in GTE Am at Le Mans

The ORECA 03 of Thiriet by TDS Racing and Pecom Racing on the podium!