While there's doom and gloom rocking the motorsports community, the worldwide economic downturn hasn't taken its toll on everyone. In fact, two European-based Le Mans Series teams are expanding their programs for 2009. Racing Box and Speedy Racing ...

While there's doom and gloom rocking the motorsports community, the worldwide economic downturn hasn't taken its toll on everyone. In fact, two European-based Le Mans Series teams are expanding their programs for 2009. Racing Box and Speedy Racing Team Sebah confirmed this week that they will each field two Lola coupes in the prototype categories next season. 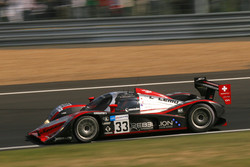 Racing Box announced last month that it will campaign two Lola B08/80s in the LM P2 category. The small Italian squad revealed Tuesday that FIA GT veterans Matteo Bobbi, Andrea Piccini and Mike Hezemans will lead the driving strength in one of its Judd-powered coupes. The previously announced trio of Filippo Francioni, Andre Ceccato and Ferdinando Geri will steer the second entry, with both cars Michelin shod.

"I desired for several years to take part in a high level season behind the wheel of a prototype and this is certainly the right occasion," Bobbi said. "The Lola promises to be very competitive as the whole package provided by Racing Box. This is an important program, ambitious and with objectives that are necessarily high. The potential is high too and I think we have all what it takes to run an excellent championship."

The 2008 season didn't go exactly to plan for Racing Box, as it's Lucchini Judd was ineligible to race at the 24 Hours of Le Mans because of expired homologation papers. Similar issues kept the team out of the remaining Le Mans Series rounds. The Paola Pavan-managed squad is set to rebound after last season's disappointments and will once again submit an entry to Le Mans.

Speedy Racing Team Sebah is another Le Mans Series regular with high hopes for 2009. After last season's promising debut of its Lola B08/80 Judd in P2, the Anglo-Swiss team will expand to also run a Lola B08/60 Aston Martin in the LM P1 category. With the ex-Charouz Racing System machine, the team hopes to be the fastest gasoline-powered P1 car on the grid.

Charouz certainly proved that last season, as the production-based V12-powered car scored two podium finishes en route to a fifth-place finish in the P1 teams' championship, directly behind the four diesel entries from Audi Sport Team Joest and Team Peugeot Total. Speedy Team Sebah could indeed be a factor for overall wins next year, as Audi recently announced its departure from the series and Peugeot has yet to firm up its plans.

Peugeot, though, did make some news last week, naming Olivier Quesnel as its new Sport director, effective Jan. 1. Quesnel replaces Michel Barge, who moves on to a different position within the company. Quesnel had been Citroen Sport's director since the beginning of the year and will continue to oversee Citroen's involvement in the World Rally Championship alongside his new role leading Peugeot's endurance program.

Saulnier goes with Mazda power for 2009

Toyota celebrate as Davidson and Buemi are crowned World Champions