Team Pescarolo has reigned supreme atop the unofficial “Petrol Division,” comfortably fastest during the Le Mans test day, first day of practice and the first two qualifying sessions, but as the grid is formed later this afternoon, Rebellion Racing will be starting the 24 Hours of Le Mans from the 8th position, ahead of the veteran French team. 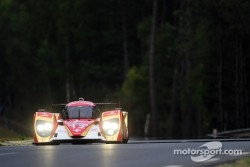 Neel Jani clocked a time of 3:32.883 with just under 30 minutes to go before the clock struck midnight, putting the Rebellion Lola 10/60-Toyota on the “petrol pole” for good.

“After (Wednesday’s sessions), we have improved the car a lot,” said Jani. “I have made my best lap time because of good sector 1 and 3. Despite having traffic in sector 2, I was able to bank a good lap.”

By this time Pescarolo was already focused on race preparation, though, and the No. 16 Pescarolo-Judd GV was in full race trim and with a full tank of petrol: it was too late to respond, even if the team had wanted to do so.

“Our agenda for the last session was to finalize optimum settings in anticipation of the 24-hour race, working on parameters such as ride comfort, the consistency on the long stints and tire wear,” explained Pescarolo technical director Claude Galopin.

After all, anything can happen …

That “petrol pole” is eighth place overall, incidentally, with slowest of the diesel-powered cars, the semi-works Oreca Peugeot still two seconds further down the road. The ACO (Automobile Club de l’Ouest, the organizer) has made adjustments for the diesel-petrol performance balance in the LM P1 category, but seven seconds still separate the top Audi from the cream of the petrol division.

The Oreca might yet be within reach for the Rebellion and Pescarolo, though, as the ACO has also adjusted maximum fuel nozzle sizes for the two engine types: petrol cars can use 38 mm nozzles while diesels are limited to 25 mm nozzles. This will likely save the petrol-powered cars more than 20 second during each pit stop.

The Pescarolo might need to stop more frequently for fuel, though, as the team is running a 2010-spec 5.0L Judd GV engine, rather than Rebellion Racing’s 3.4L Toyota RV8KLM, which meets the ACO’s 2011 regulations. Whether the smaller restrictor (42.9 mm on the Judd vs 43.3 on the Toyota) also helps fuel consumption remains to be seen – the lengths of the first few stints for each team will tell the story.

The grunt of the 5.0L Judd is indisputable, though. “I'm really happy to get the ‘pole position’ of petrol cars,” said Jani. “The Pescarolo car is very strong here, in particular with a higher top speed than our Rebellions on the straights.” 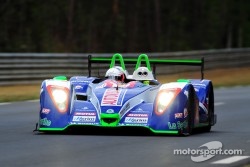 Jani, driving in his third 24H, is once again partnered with Nicole Prost, and this year the two are joined by Jeroen Bleekemoelen. Rebellion’s second Lola-Toyota will be driven by Andrea Belicchi, Jean-Christophe Boullion and Guy Smith.

Team Pescarolo’s driver lineup is 100% French, like the team itself: it will be led by Le Mans veteran Emmanuel Collard, in his 17th entry at the famed race, along with Christophe Tinseau and Julien Jousse.

And then there is reliability, traditionally Pescarolo’s greatest strength. Will these two teams be able to use reliability, quick pit stops and a dash of luck to be able to mix it up with some of the diesel entries?