Scottish driver Ryan Dalziel is taking to the track for the 24 Hours of Le Mans in an SRT Viper GTS-R, hoping for another class win at the premier event.

DAYTONA BEACH, Fla. – Word on the streets, and the road courses for that matter, is concise and convincing when talking about Ryan Dalziel.

In GRAND-AM Road Racing that’s been somewhat of a secret for a number of years although not by anyone’s design. The dominance of road racing legend Scott Pruett and his Ganassi Racing co-driver Memo Rojas – they’ve won four Rolex Series DP championships, including the last three consecutively – has served to overshadow wheel men like Dalziel, lead driver for Starworks Motorsport. That, despite the fact that Dalziel had the fastest DP race lap during the Rolex 24 At Daytona in 2012.

“Ryan’s one of those guys, well, you have to be ready with your ‘A’ game against him,” said Pruett. “He races you wheel-to-wheel, fender-to-fender. 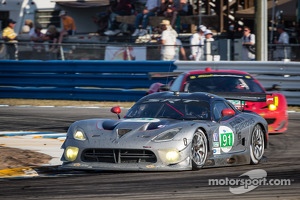 Last year, the stage got bigger for the Scottish driver – and the secret was no more. Driving an HPD ARX-03b P2 prototype for Starworks, Dalziel co-drove to a class win at the Mobil 1 Twelve Hours of Sebring, the season-opening event for the American Le Mans Series presented by Tequila Patrón. Three months later, a class win at the 24 Hours of Le Mans. And in the autumn, this capper: a World Endurance Championship in LMP2 for Starworks.

Toss in a Prototype Challenge win at the ALMS’ season-ending Petit Le Mans powered by Mazda at Road Atlanta, which ended a PC championship season for CORE Autosport, and you were talking about one of the greatest individual sports car seasons in recent years. SPEED piled on further recognition, naming Dalziel as the 2012 Sports Car Driver of the Year.

That was then. This is now: Dalziel returns to the 24 Hours of Le Mans later this month (June 22-23), co-driving the No. 53 SRT Viper GTS-R, in Le Mans’ GTO Pro class. He will team with Marc Goossens and Dominik Farnbacher, a high-profile trio in a much-anticipated Viper return to Le Mans.

“Definitely, when last year ended and we looked at all the results and stats, it was like ‘What do you do now after you’ve won everything this year?’” Dalziel said. “Well, the answer for me is winning everything twice. I don’t feel like I’ve accomplished everything I want to, just yet.”

Season-for-the-ages talk aside, there was still a missing highlight in 2012 according to Dalziel – a Rolex 24 At Daytona victory. He co-drove a Starworks Ford/Riley DP to a second-place finish, two years after what he considers a career-defining victory on the Daytona International Speedway high banks. 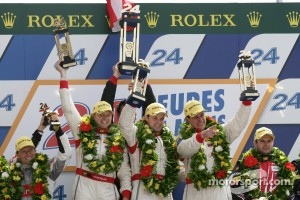 “To me, winning at Daytona in 2010 will forever go down as one of the biggest moments for me because at that time my career was nowhere near where I wanted it to be,” Dalziel said. “That was special because it leapfrogged me into the ‘big winner’ category. That win opened up a lot of opportunities for me, starting with running at Le Mans in 2010. If I hadn’t won at Daytona that year, I don’t think would’ve ever happened.

“So, while in terms of single accolades, Le Mans is perhaps my single biggest achievement, but what at enabled me to win at Le Mans in 2012 was winning at Daytona in 2010.”

As for a repeat Le Mans victory, “Our chances are really high,” Dalziel said. “The Viper is a front-running car, which we’ve proved this year. (Fifth in the GT class at the season-opener in Sebring.)”

And so, a new goal: “I think it‘d be amazing, during your career, to try and win Le Mans in every class,” Dalziel said. “I won last year in a prototype so now I’m looking forward to winning GT for Viper.”

Scott Tucker and Level 5: Inside the Pits at Le Mans

RACE: 12 Hours at the Point results