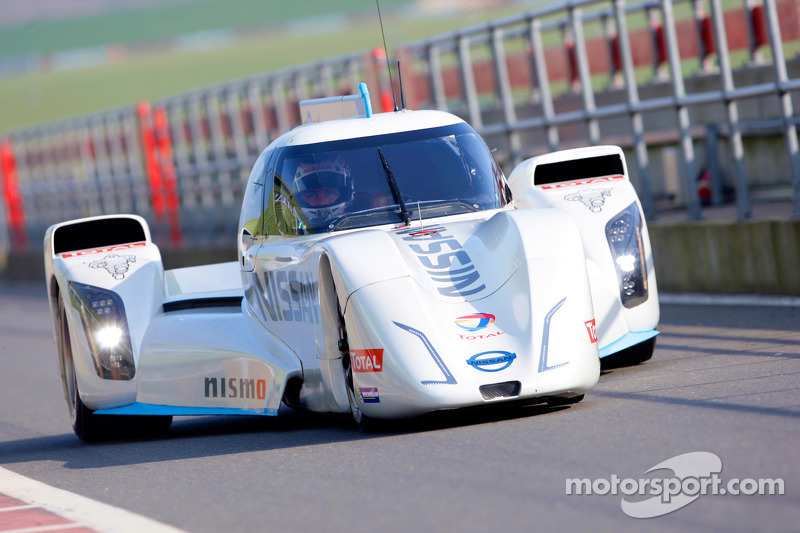 Motoyama will make his fourth Le Mans start aboard the Nissan racer which combines a 300 horsepower electric powertrain with a 400 horsepower/40 kilogram/1.5 liter turbocharged petrol engine.

The Japanese ace completed his first laps aboard the car at Circuit Paul Ricard in the south of France this week alongside his teammates.

Motoyama has ‘unfinished business’ at the Circuit de la Sarthe after last driving there in 2012. The four-time Formula Nippon champion drove for Nissan at Le Mans and became a fan favorite after putting in a desperate valiant effort for an hour to repair his car after being pushed off track and into the wall.

With drivers having to perform any repairs without any outside assistance if they get stuck on course, the Japanese star’s efforts became a YouTube sensation after his 'never say die’ efforts were seen worldwide.

Sadly for Motoyama, his efforts fell short with the pit lane entrance - and additional help from the Nissan crew - less than half a mile away.

“This is the world first with Nissan using electric power in this way at Le Mans and I am very happy to be a part of it,” Motoyama said.

“For me I have a bit of unfinished business at Le Mans. The accident two years ago was very unlucky, but most racing accidents are. Just to finish the race at Le Mans is very difficult and that is our main goal. I am really looking forward to the race.

“My teammates Wolfie and Lucas have a lot of miles with the car already and it has been great to work with them this week. I am hoping I can use my experience to help with the development process.”

Motoyama was previously involved in the development process of the Nissan NISMO LEAF RC, Nissan’s first foray into the electrification of the racing car. Driving the car at a number of events.

“When I drove the Nissan NISMO LEAF RC it had a huge amount of torque and I was very impressed by the performance compared to a normal internal combustion engine,” Motoyama said.

“The Nissan ZEOD RC takes things to whole new level. I am very excited and looking forward to driving the car at Le Mans.

“Le Mans is such a huge race and very popular for the Japanese people. There has been many drivers from Japan who have been successful here in the past and I would like to be one of them – I will be working very hard with the team to do my best.”

Motoyama and Ordóñez plan on completing as much testing miles as possible prior to Le Mans as a clashing Super GT round will force them to miss the annual Le Mans test day on June 1.

Two-time Le Mans P2 winner, Brazilian Tommy Erdos will fill in for the pair alongside Reip on the test.

“After the effort Satoshi put in two years ago to try to get the car back on track, having him back for the ZEOD program was a easy choice,” said Darren Cox, Global Head of Brand, Marketing & Sales, NISMO.

“That ‘never say die’ attitude really him a cult figure and real favorite with the fans. He was extremely quick the last time he was in the car at Le Mans and we are thrilled to have him back.

“After what happened at Le Mans two years, I promised him we’d get him back to Le Mans – he fully deserves the opportunity.”