Proving that the best laid plans can sometimes count for little at one of the world’s most challenging endurance races, Scott Tucker’s Level 5 Motorsports team has been tested in its preparations for the start of the 80th running of the 24 Hours of Le Mans. However, as the team knows well from experience, where you start for a 24-hour race matters less than where you finish. 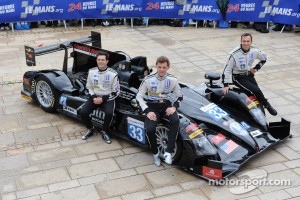 Despite there being four hours of free practice and six hours of qualifying available to competitors, the No.33 Level 5 HPD ARX03b, which is entered in the extremely competitive LMP2 class, fell prey to a number of technical issues following an off-track excursion which prevented the team from making a proper challenge on class pole. They will start the race on Saturday from 14th place in class, and 27th on the overall starting grid of 56 cars.

Scott Tucker, a five-time national champion driver from Kansas City, was the highest-finishing American in the 2011 edition of the 24 Hours of Le Mans as he and his colleagues Christophe Bouchut and Joao Barbosa claimed a well-deserved third place in class. With Mexican racer Luis Diaz, a regular teammate of both Tucker and Bouchut in the American Le Mans Series joining the team for 2012, confidence was high going into qualifying.

The 8.469 mile long track, which is made up mostly by public roads which are closed for racing, is one of the longest circuits in the world and it is famous for tripping up even the most talented and storied drivers at times. Christophe Bouchut, going into his 19th 24 Hours of Le Mans got caught out in the first qualifying session and damage was sustained to the gearbox and to some aerodynamic parts which are so crucial for stability around this challenging track.

Scott Tucker, the only American to be racing in the Prototype classes, said after qualifying: “We had to spend a bit more time in the garage than we’d planned for due to problems surrounding the accident, so we used the time we did have to make sure we had a good comfortable race car, checked through all our systems and make sure lights were working at the optimum level and so on. Our main objective was to get the car into race trim so we all feel as comfortable as possible with it come race time. It was a pity about not being able to go for a class pole, but it’s not the end of the world for a 24 hour race.”

All three drivers had to complete a mandatory number of night laps in order to qualify for the race and, because Luis Diaz is a rookie at Le Mans, he had to do at least five laps. All three drivers were able to do this without any concerns, and now look forward to tomorrow’s free day in order to rest up and prepare for the big event. The only major commitment they have is a Drivers’ Parade in the centre of Le Mans, in front of crowds of up to 50,000, toward the end of the day. Drivers from every car are taken through a 2 mile route through the town on the back of open-top vintage cars, and are able to meet and connect with fans from almost every continent. The atmosphere for the 24 Hours of Le Mans really starts to build from that moment on, and all thoughts of where Level 5 Motorsports start the race will be forgotten.

Mark Martin has one fear in racing