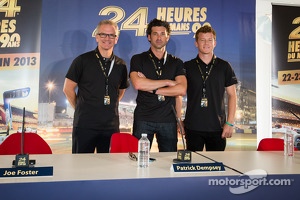 Dempsey, Foster and Long are the only All-American driver lineup among the race’s 55 entries and are quickly developing a national following as #TeamAmerica. Long’s top lap of 4:04.006 trailed only the leading Aston Martin Vantage V8s that swept both of the top spots in the GTE-AM class.

Changing wet and dry conditions drew a number of top competitors into accidents but the Dempsey Del Piero Racing trio never put a wheel wrong during the test. Dempsey’s longest stint on track run was nose-to-tail with Larbre Competition Corvette driver Ricky Taylor and the duo steadily climbed the GTE-AM order during the 10-laps.

“It’s great to be back, we are really thankful to be here, and I forgot how much fun it is to be at Le Mans,” Dempsey said. “It was fun running with Ricky Taylor, Patrick Long is such a talented driver and Joe has worked so hard just to get us back here, he has really stepped it up, and is always there for us. Really, this is just a celebration of just being here.”

Dempsey and Foster are making their second-career Le Mans appearance after a ninth-place finish in 2009 in a GT2 AF Corse Ferrari F430 but had their first true experience of Le Mans in the rain on Sunday.

“I could feel my experience from 2009, but it was a little challenging at first in the rain, to relearn the track, but it was also really important to have that opportunity in the wet,” Dempsey said. “The last time here I didn’t really have any time on a wet track.”

Foster used the sketchy weather as an opportunity to see how the team’s proven Michelin tires, both dry and wet fitments, performed in the tricky mix of conditions.

“It rained most of the day,” Foster said. “There was a tiny bit of dry running near the end but we each got like two dry laps, literally. It really rained all day but we didn’t put a foot wrong and didn’t touch anything, nothing hard any way. It gave us a chance to try some tire stuff with the Michelins and some experimental setups and that was very valuable.”

Long is America’s only factory Porsche driver and a two-time GT winner at Le Mans. He won in his debut in 2004 and picked up a second class victory in 2007.

“Watching Joe and Patrick Dempsey work together this weekend, they have formed a partnership and a friendship and I am happy to offer my experience in the 911 RSR,” Long said. “This being my 10th time here at Le Mans for the race, anything that I have learned is an open book to these guys. We have really clicked and jelled quickly and that and this test has us really confident for the race.”

In addition to the productive on-track day Sunday, Dempsey and his pair of co-drivers participated in a full agenda of media and promotional activity on Saturday. The schedule included the team’s and Dempsey’s only official press conference of the 2013 Le Mans event that attracted a full house of international media.

“We are the only All-American driving team and I think that means a lot to all of us,” Dempsey said. “The history and heritage of that is so impressive and hopefully we can leave a mark and make a contribution in that great legacy.”

The Dempsey Del Piero Racing Le Mans entry is being fielded in a partnership with the experienced and proven Proton Competition racing team from Germany. Among the small group of American personnel working this year’s Le Mans campaign is longtime Dempsey Racing team race communications strategist Jim Jordan who was also part of the 2009 effort.

Long was asked by team principal and lead driver Michael Avenatti to take his place less than two weeks ago when several non-racing commitments emerged in the last month. Avenatti stepped out of the Porsche in favor of Long but remains committed to the remainder of the 2013 American Le Mans Series (ALMS) season in the GT Challenge (GTC) class.

Dempsey Del Piero Racing with Proton will now shift its focus to the start of race week activities which begin with the traditional scrutineering, June 16 – 17, followed by practice and qualifying on June 19 – 20.