The invitation was extended by the ACO to field two SRT Viper GTS-Rs in the LM GTE Pro Class at the 90th anniversary 24 Hours of Le Mans. Drivers include Tommy Kendall, Marc Goossens, Kuno Wittmer, Dominik Farnbacher and Jonathan Bomarito.

The invitation was extended by the ACO to field two SRT Viper GTS-Rs in the LM GTE Pro Class at the 90th anniversary 24 Hours of Le Mans. Drivers include Tommy Kendall, Marc Goossens, Kuno Wittmer, Dominik Farnbacher and Jonathan Bomarito.

Chrysler’s SRT Motorsports team has accepted an invitation to race two SRT Viper GTS-Rs in the 90th anniversary edition of the 24 Hours of LeMans, the grueling race that takes place in France on June 22 and 23, 2013. The announcement was made by Ralph Gilles, president and CEO of the SRT Brand and Motorsports, Chrysler Group LLC. “Racing is truly a part of the illustrious history of Viper and a proving ground for the SRT brand,” Gilles said.

The invitation was extended by the ACO (Automobile Club de l’Quest) to field two SRT Vipers in the LM GTE Pro class for the upcoming race. The invite was issued and accepted in Paris earlier today. For Viper, the race marks a return to the scene of three consecutive class victories when it finished one-two from 1998 to 2000.

It surprises us to get invited, but we were prepared for it....

The Viper driver line-up will include American champion Tommy Kendall along with Marc Goossens, Kuno Wittmer, Dominik Farnbacher and Jonathan Bomarito. Other drivers are being tested at this time and an expanded line-up will be announced relatively soon.

SRT Motorsports has teamed with Riley Technologies in the design and construction of the cars, and the two entities will work together at LeMans. The two cars will be raced in the American LeMans Series season again this year, and following its four debut races a year ago, the first outing in 2013 will be at the Mobil 1 12 Hours of Sebring in March.

“There’s a lot of pride in accepting this invitation, and it is a huge honor,” Gilles said during an afternoon press conference. “And it is very humbling. It surprises us to get invited, but we were prepared for it on the off chance it would happen. I can’t tell you how excited we are to accept the invitation. It will be a great platform for the SRT brand.” 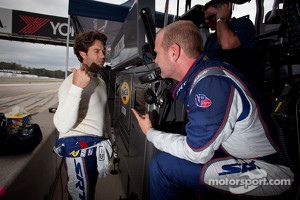 Added Kendall, “For me, there aren’t a lot of things left on my unfinished business list in the road-race world, but LeMans is one of them. And I wouldn’t have gotten off the couch if this weren’t a possibility. LeMans is one of the greatest celebrations in sports. We have our heads down as we have had a lot of ground to cover in the last year. And there’s a huge burst of energy going into this program.”

Gilles addressed the logistics or preparing for LeMans and indicated that the Riley organization and others will handle much of it. “We just have to be a well-oiled machine when we get there,” he commented, indicating the upcoming Sebring event will help the team gain experience and develop them refine their game plan.

For Kendall, he said, “It is largely physical and while I wasn’t in driving shape a few months ago, it was easy to get motivated when you think about the long stints in the car and the heat. At Daytona (the Rolex24), we saw how endurance races have evolved into sprint races. Drivers can be consumable like tires, so you need a lot of work on fitness and diet. And for me, it is a lot about visualization and focusing on the preparation and so forth.

“Our motivation is to get up there on that podium.” 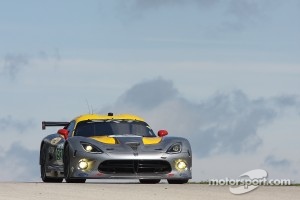 Gilles and Kendall both underscored the importance of their work with the Riley organization, believing the latter’s involvement gives them considerable optimism going forward. “They are a very accomplished team,” Gilles noted. “They are doing everything possible to get ready.”

Regarding the competition, Gilles said the team has been testing extensively as they know the extent of the competition to be encountered. “We have made some great progress in terms of durability,” he said.

The factory Corvette team will be one of the keenest foes, and the SRT organization indicated they are looking forward to it. “I don’t think it will take us years to catch-up. We beat them back in the day,” Gilles said. “In all honesty, I am glad to see two Great American teams battling it out.”

Gilles went on to say his company is doing everything possible to be competitive. “We have the drivers and talent and the car has shown us great potential,” he commented but also realizes you need race experience as a learning tool. “We do believe the Viper has the right attributes to make it an ideal GT car.”

The team will take to the track for the first time next week during the ALMS winter test at Sebring, and from that point forward, it will be full speed ahead in preparations for the 24 Hours of LeMans.