On Friday 8th March, the French make announced its Le Mans 24-Hours comeback in the LM P2 category. The Automobile Club de l’Ouest is very happy about this entry 35 years after the Alpine-Renault A442B’s famous victory in 1978.

In the Le Mans 24 Hours on 22-23 June 2013, the Alpine legend will be reborn with the entry of an Alpine in the LM P2 category by Philippe Sinault’s and Didier Calmels’ Signatech team: the drivers are Pierre Ragues and Nelson Panciatici.

The news was announced on Friday 8th March at the Le Mans 24-Hours circuit in the presence of Pierre Fillon, the President of the Automobile Club de l’Ouest, Carlos Tavarès, Assistant General Manager Renault Operations, Bernard Olivier, president of the Alpine-Caterham Car Company, Pascal Couasnon, the director of Michelin Motorsport which will supply tyres for the Alpine, and Philippe Sinault, the Signatech general manager. 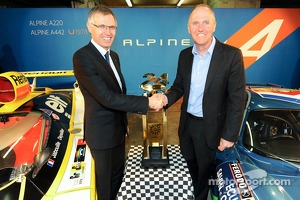 The Dieppe-based make, relaunched on 5th November last year with the creation of the Alpine-Caterham car company, has swelled the ranks of motor car manufacturers already officially entered for the Le Mans 24 Hours: Toyota, VAG (via Audi and Porsche), General Motors, Honda (with its branch HPD, Honda Performance Development), Fiat (via Ferrari and STP Viper), Aston Martin, Lotus and Morgan.

Nissan is also present as an engine supplier in LM P2, and will be at the start of the 2014 Le Mans 24 Hours with an in-house designed revolutionary car in the context of the 56th pit, which prefigures an entry in LM P1 in 2015.

Since 1923, the Le Mans 24 Hours have been the greatest test bed in the world for the major motor car manufacturers generating a fantastic list of innovations, revolutionary when they first appeared, which are generalized today.

The participation of this Alpine LM P2 prototype in the colours of one of the major brands in motor sport is in the same vein.

While in 2013, the Le Mans 24 Hours are celebrating their 90th anniversary, the return of Alpine to the greatest endurance race in the world intervenes 50 years after the make’s first entry for the event, and thirty-five after the historic victory of the no. 2 Alpine-Renault A442B driven by Didier Pironi and Jean-Pierre Jaussaud.

The name Alpine and the Sarthe Classic are indelibly linked, and the return of Alpine will enable French fans to thrill once again to the famous French blue colours.

Pierre Fillon, President of the Automobile Club de l’Ouest: “The Automobile Club de l’Ouest is delighted about Alpine’s comeback to the Le Mans 24 Hours. In the past, the manufacturer racked up a marvellous set of results in the major branches of motor sport, but it’s to Le Mans and not anywhere else that Alpine is giving priority for its return to racing. We’re particularly flattered by this decision that follows in the historical direction of motor sport. Not just because we’re celebrating the ninetieth anniversary of the Le Mans 24 Hours in June, and having a major French make at the start pleases us enormously, but above all because it proves that both our technical and sporting regulations allied to the immense popularity of our event, which give pride of place to close contact with the spectators, is in perfect harmony with today’s world and motor racing as we see it. That’s the reason why our race has enjoyed such amazing success with the major car manufacturers.”

Carlos Tavarès, Assistant General Manager Renault Operations: “Alpine’s comeback in 2013 to the legendary Le Mans 24 Hours is the start of a new, long-term adventure. The deep passion that is driving us is equalled only by the cost-effective aspect of our return, which is based on the involvement of our partners and supporters whom I would like to thank. Step by step we’ll try to write a new page together in the history of the great French sports car make – Alpine!”