American Le Mans Series and GRAND-AM Road Racing involvement in this year’s 24 Hours of Le Mans showcases the two North American series that next year will be unite as one series.

The unmistakable throaty roar of the V8 engine.

Legions of fans all over the world. 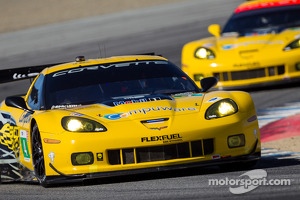 There can be little argument that Corvette Racing has become the gold standard among GT teams competing in the 24 Hours of Le Mans since the turn of the century. The pair of Compuware-backed Corvettes has established itself as some of – if not THE – most identifiable cars racing in the American Le Mans Series presented by Tequila Patrón.

More often than not over the past decade-plus, the Corvettes have done the ALMS proud by bringing home trophy after trophy from the Circuit de la Sarthe. Corvette Racing program manager Doug Fehan takes it a step further, pointing out how the team has done its country proud.

“We know full well that each time we participate in that event that we are representing not only Chevrolet and General Motors, but also the United States,” he said. “We understand it and we accept that challenge.”

Meeting the challenge in this year’s 90th Anniversary 24 Hours of Le Mans will be the same six drivers that shared the two Corvette Racing entries last year. Co-driving the No. 73 Corvette C6.R will be ALMS full-time racers Jan Magnussen, Antonio Garcia and GRAND-AM Rolex Sports Car Series regular Jordan Taylor. In the No. 74 Corvette will be 2012 ALMS GT co-champions Tommy Milner and Oliver Gavin alongside another full-time Rolex Series racer, Richard Westbrook.

Magnussen and Gavin are the most decorated of the Corvette squad at Le Mans, with four class victories apiece, while Garcia owns three class victories at Le Mans. Milner earned his first and only 24 Hours of Le Mans victory in 2011, while Taylor and Westbrook hope to win their first this year.

All of Gavin’s Le Mans victories have come behind the wheel of Corvettes, the most recent coming in 2006. He’s hoping that his GT victory in March’s Mobil 1 Twelve Hours of Sebring Fueled by Fresh From Florida alongside Milner and Westbrook foreshadows win No. 5 for him at Le Mans.

“The momentum we gained at Sebring can put us in good stead for Le Mans,” Gavin said. “I think it’s something that will give us a certain amount of confidence, especially coming off the battles of winning the ALMS championship last year. Tommy and I have really established a very good partnership. We seem to work really well together.”

Fehan views the Sebring victory as one that drove home the resolve of the entire team. It was also one that took the proverbial monkey off the team’s backs, as Sebring has been anything but kind to Corvette Racing over the years.

“Sebring, for us, is of paramount importance, only because it has been our Bermuda Triangle,” he explained. “We have had races there that have been absolute debacles, not necessarily through any fault of our own.

“At Sebring, we have not been blessed with a lot of good fortune, so to come out of the chute this year going to that place, having issues – I mean, we were two laps down twice in that race. We managed, carrying out in that true Corvette spirit of never, ever giving up. We battled back twice from two laps down to take that victory. That, in and of itself, puts the team in such a mental state, reviving that spirit and rekindling that atmosphere of, ‘We cannot be beaten, we will not be beaten,’ I think, sets a great standard and really gives us great initiative and momentum going into Le Mans.”

The No. 73 team may have the most momentum going into Le Mans. Taylor took his second Rolex Series Daytona Prototype victory of the season just last weekend in Detroit, while Garcia and Magnussen won the most recent ALMS race at Mazda Raceway Laguna Seca last month.

“It feels like a long time already since not having raced,” Garcia said. “But the timing allows us all to prepare well for Le Mans. This time off has allowed the team to prepare the cars very well. It is a race with almost 100 years of history and each year makes the event bigger and bigger. It is the biggest race in Europe and one of the biggest in the world. The team, the fans and drivers all wait for this event every year.”

For the first time since 2000, this year’s 24 Hours of Le Mans will see the battle between Corvette and Viper renewed on the world’s biggest stage. The Viper won three consecutive races at Le Mans from 1998 through 2000 while the Corvette Racing program was still in its infancy, having come online in 1999.

The tables have turned since then, what with seven victories for Corvette since 2001. The SRT Viper GTS-R program returns to Le Mans this year for the first time since 2000.

“Those early battles were classic battles,” Fehan said. “They [Viper] were the gold standard by which all other GT cars were measured. What we learned from our encounters with them was how much more work we had to do, how much harder we had to work, and how much more dedication we had to have in making ourselves get better. We had to learn more about the car, have our engineers work harder and we went and we did that.

“It is a huge reward when you go and you begin to dominate. Having them return is great for a couple counts. Number one, competition makes the field all get better. Number two, any time you can bring an additional manufacturer into the fray, it brings another level of fanbase attraction to it. At the end of the day, we’ve got to have fans and we’ve got to have spectators to make this thing work. They’re certainly a welcome addition.”

But what would be a most welcome addition to all involved with Corvette Racing is an eighth victory at Le Mans. One thing is certain; victories at Le Mans aren’t taken for granted.

“To go over there and win this race one time is a lifetime achievement,” Fehan said. “Toyota has spent hundreds of millions of dollars and has yet to win over there. To go over there and do it not once, but seven times, is beyond comprehension. It’s just an incredible run that we’ve had.