Back in 2000, the Viper GTS-R was the best sports car in the world. Last year in August, the Viper made its in return to the sportscar stage at the ALMS race in Mid-Ohio and now they are making their return to the 24 Hours of Le Mans.

In those days, the top GT class was known as “GTS.” The Corvette Racing program – which now has seven victories at Le Mans, nine American Le Mans Series presented by Tequila Patrón manufacturer and team championships and eight ALMS driver championships – was still in its infancy, having just come online in 1999.

And standing atop the world were what were then known as “Chrysler” or “Dodge” Viper GTS-Rs – depending on where in the world they were racing. Fielded by Viper Team Oreca, Chrysler Viper GTS-Rs earned consecutive class victories at the 24 Hours of Le Mans in 1998, ’99 and 2000. The team also claimed an overall victory with its Dodge Viper GTS-R in the 2000 Rolex 24 At Daytona. 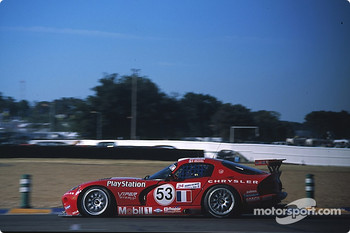 But by 2001, the all-conquering Viper GTS-Rs had departed from the scene.


Last August, in the ALMS race at Mid-Ohio Sports Car Course, the SRT Viper GTS-R returned to competition, with an eye toward returning to Le Mans this year. SRT Motorsports will field two entries in the 90th Anniversary 24 Hours of Le Mans next week; the No. 53 SRT Viper GTS-R for co-drivers Marc Goossens, Dominik Farnbacher and Ryan Dalziel and the No. 91 SRT Viper GTS-R for Jonathan Bomarito, Kuno Wittmer and Tommy Kendall.

Flashing back to last summer, the Viper debuted to much fanfare at Mid-Ohio, albeit with some to-be-expected teething problems. In fact, the team struggled in all four of its races at the end of the 2012 ALMS season.

“It’s weird,” said Tommy Kendall, who drove the Viper in 2012 ALMS events and is doing the long-distance races this season. “At our first race, I had this whole timeline in my mind. But at Mid-Ohio, I said, ‘Oh, wow. We’re way further behind than I thought. We have further to go.’”

Most seasoned sports car racing observers agreed with Kendall. However, knowing the previous history of the Viper GTS-R program and the resources behind SRT Motorsports, those same observers also knew that, sooner or later, the Viper GTS-R would find its way back to the top.

If the early portion of the 2013 American Le Mans Series is any indication, it’s looking like it may be sooner.

At the season-opening Mobil 1 Twelve Hours of Sebring in March, Farnbacher, Goossens and Dalziel were top contenders in the GT class for the first two-thirds of the race in the No. 91 Viper GTS-R before mechanical gremlins set them back to an eventual fifth-place result.

In Round 2 at the Tequila Patrón American Le Mans Series at Long Beach in April, Farnbacher put the No. 91 on the pole position and Bomarito qualified the No. 93 machine third in the GT class. The next day, Farnbacher and Goossens gave the new program its first podium result with a third-place run.

How did fortunes change so quickly?

“Over the winter, we had our heads down and were busting our tails,” Kendall said. “We knew we’d made some big gains, but in the back of your mind, you’re thinking, ‘The other teams are making similar gains.’ To have it confirmed that we had actually closed the gap was really, really exciting for everyone.”

Make no mistake, everybody associated with SRT Motorsports knows that there is still much work to be done to get where they ultimately want to be. But – just like Corvette Racing in 1999 and 2000 – it’s still early days for the SRT Viper GTS-R program.

“This year, your goal was just to get to Le Mans,” said Beth Paretta, marketing director for SRT Motorsports. “Every step, you just kind of keep moving your own goalposts for the team. At the end of last year, the goal was to just get a couple races under our belt. The goal for the winter was to work on improving the car. Then, the goal was to get invited. Here we are now on the eve, and really our goal is to finish. If we can finish with both cars, that would be great.”

Everybody on the team shares the same goal. After all, as the adage goes in racing, ‘To finish first, you must first finish.’ But Kendall, for one, believes that the team has a shot to potentially do more than that.

“I’d say we’re a little bit of a longer shot, but I think we definitely have the ability to contend,” Kendall said. “In terms of what’s it going to take? Because there are going to be teams that make no mistakes or just very small ones, speed is going to be important. I think that’s something that shows up more at Le Mans than any of the other endurance races.”

So speed is obviously one very important component to success. What else? 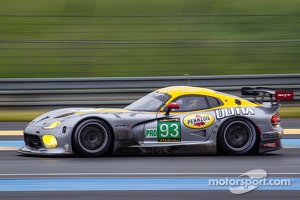 “There are so many unforeseen circumstances,” Paretta said. “That’s why everybody says finishing is such a big deal, because so much can go wrong. Do we have a team that could get on the podium? Absolutely. Do we have a car that could? Probably, not knowing the full GT field and not knowing how they’re all running. I think the ingredients are all there but there’s a lot of luck involved too. Things have to fall your way.”

Luck is something often talked about in racing, but can be hard to quantify. SRT Motorsports Lead Engineer Matt Bejnarowicz takes a crack at it.

“One of my old bosses used to quote his old boss, Carroll Shelby, often,” he said. “He used to say in racing, you don’t necessarily need good luck, but you need an absence of bad luck. I’d say first and foremost, we need our fair share of this.”

There you have it. Speed and no bad luck are two keys to success at Le Mans, but what about the competition?

The team knows it will face stiff competition at Le Mans in the GTE Pro class, where every manufacturer sends its very best drivers, personnel and equipment in an all-out effort to win. But they also know that the competition they face all season in the ALMS GT class is very stout and is good preparation for Le Mans.

“The ALMS teams have shown us that the fastest lap times are not the only factor in winning sports car races,” said Bejnarowicz. “You need to be at the top of your game everywhere – race strategy, pit stops and fuel conservation just to name a few. The GT class is the toughest in the world because of the teams preparing the best sports cars in the world.”

Back in 2000, the Viper GTS-R was the best sports car in the world. It may only be a matter of time before it is again.

Live television coverage of the 90th Anniversary 24 Hours of Le Mans will air on SPEED beginning at 8:30 a.m. ET on Saturday, June 22.