The Key To Victory In The 24H Le Mans: Zero

Audi an Peugeot seeking victory through a perfect race

This year’s qualifying session for the 24 Hours of Le Mans was one of the most competitive ever: While Audi’s new R18 TDI took first, second and fifth positions, led by the performance of hometown hero Benoît Tréluyer, even the sixth-placed No. 7 Peugeot 908 was only 0.534 seconds off Treluyer’s pole-winning lap time.

“I knew this was going to be tough,” admitted Marc Gené of the No. 7 Peugeot. “Anyone could have gotten the pole position. But I have never seen qualifying decide the race winner (at Le Mans).” 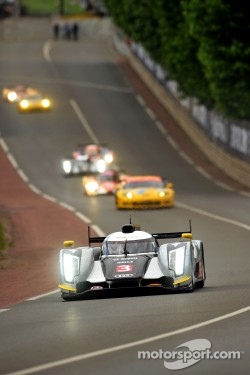 Both Audi and Peugeot team bosses, Wolfgang Ullrich and Olivier Quesnel, respectively, agreed that in a 24-hour race, grid position doesn’t matter – but neither would either one reveal anything of their race strategies.

If you want to win this year, you must drive a zero-error race.

“Let me say this quite clearly,” stated Ullrich. “We used qualifying to get a decent setup for the race.”

Indeed, with the exception of Tom Kristensen, each of the Audi drivers only used a single set of new tires in Thursday’s qualifying session, and even more remarkably, Tréluyer’s Michelin tires already had 20 laps of wear on them when he set the pole-winning lap time.

Kristensen took on a second set in the final minutes before midnight, and pushed hard to get to the pole, but before he got there, he lost control of the car at Tertre Rouge, slamming hard into the barriers. Despite extensive bodywork damage, the Audi’s tub was undamaged, but it still meant long hours of rebuilding the car for the No. 3 Audi’s mechanics.

This, however, appears to have been the only incident so far this week where an Audi driver lost control of the car, and the Audi pilots expressed strong confidence in the new-for-2011 R18.

“Aerodynamically it works well and it’s built around a lighter TDI engine,” explained Kristensen’s co-driver Allan McNish. “But the most important this is that you can push it, and push it hard.”

One new challenge for the Audi team is the closed-cockpit configuration. The new ACO pit stop rules – limiting number of mechanics changing tire and preventing simultaneous tire changes and refuling – no longer favour open-cockpit cars, but the team’s last experiences with closed-cockpit cars date back to the original R8C of 1999, as well as the corporate sister brand’s 2001-2003 Bentley Speed 8. Tom Kristensen and Rinaldo “Dindo” Capello were both part of the winning Bentley crew in 2003, and remarkably Capello drove for Audi in 1999 as well, albeit in the R8R roadster rather than the coupé.

“There is the problem of the windshield,” said Ullrich. “We simply don’t have many years of experience racing in a closed-cockpit car. 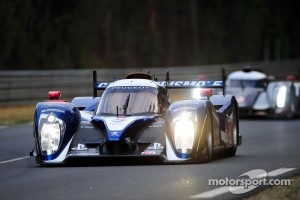 The Peugeot team does, though, and that is an advantage that the French manufacturer needs to exploit to claim victory on Sunday afternoon. That, and a perfect reliability record in the race.

“We really pushed to achieve maximum reliability (in developing the car),” Bruno Famin, Peugeot’s technical director, explained. “We’ve worked harder on the validation of our parts.”

All that said, much remains unknown and open to speculation at this point. How many laps will the 908 and R18 be able to complete in a single stint? Has Audi solved the rear tire-wear problems seen at the R18’s inaugural race at Spa? Will the Peugeots’ race pace match that of the Audis?

And, most importantly, will rain stay away, or will the threatening showers produce a dry-wet-dry race that’ll be even more unpredictable?