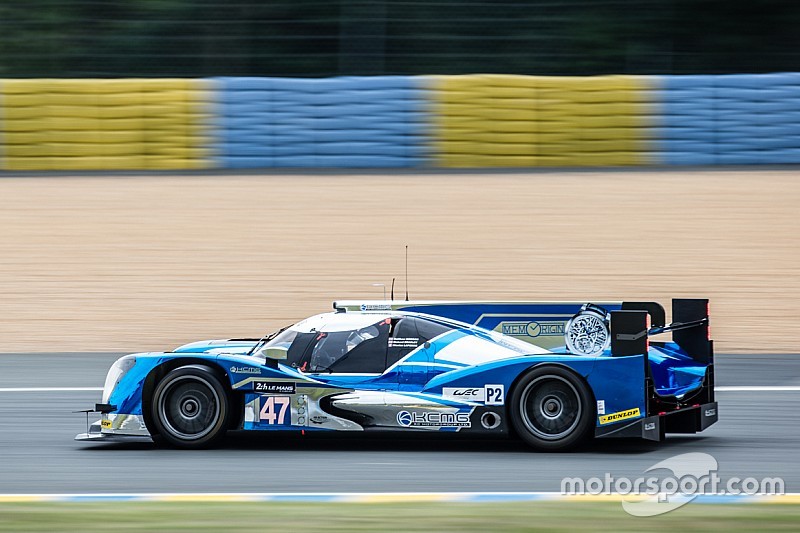 The ORECA 05 of Asian team KCMG signed the fastest time in both qualifying sessions.

Following an encouraging Test Day, the new ORECA 05 LM P2 confirmed their good impressions on the 24 Hours of Le Mans circuit this Wednesday, beginning in free practice, then in the first qualifying session.

The ORECA 05 of Asian team KCMG signed the fastest time in both sessions, while Thiriet by TDS Racing was also consistently at the front of its class.

The Alpine 450b also had a decent showing, finishing the evening further down the order.

A Similarly to the Test Day already 10 days ago, free practice was marked by changing weather conditions, with rain making intermittent appearances throughout the session. It’s not an easy task to prepare for the race in such conditions, especially for KCMG and Thiriet by TDS Racing, who are both still learning the new ORECA 05 Le Mans aero kit. The two teams tackled the session in a cautious and methodic way, with an interesting result to say the least: fastest time for KCMG after four hours of practice, and third quickest time for Thiriet by TDS Racing, after occupying second place for most of the session.

Practice was interrupted twice, including once for an off by the ORECA 03R entered by Murphy Prototypes. The car was seriously damaged by the Irish team, well-known for its team spirit, was able to make repairs and return to action before the end of the qualifying session thanks to a remarkable team effort.

The qualifying session, this time on a completely dry circuit, began with a quickened pace right from the start at 10pm. While the LM P1 class was breaking lap records, KCMG found the top of the timesheets in LM P2 in the first few minutes with Richard Bradley behind the wheel of the No. 47 ORECA 05 (3:38.032). Nicolas Lapierre and Matt Howson then took over driving duties to continue refining the car’s setup.

For Thiriet by TDS Racing, the three drivers also concentrated on finding the best balance for the car with several changes made to various configurations, while ensuring they all qualified by completing the necessary laps at night. The French team ended the session in a provisional fifth place, which is not necessarily indicative of its potential.

Following another red flag, Signatech-Alpine reached the fourth row with the Alpine A450b, despite having its five top laptimes nullified due to not respecting track limits. Murphy Prototypes was able to rejoin the action despite its earlier accident, a good sign ahead of the second and third qualifying sessions on Thursday, while Ibanez Racing continued to learn the ORECA 03R.

"The pole is not our customer teams’ objective, but it’s always a good feeling when we get it, especially at the 24 Hours of Le Mans, and today KCMG took a step in that direction, " admits Hugues de Chaunac, Groupe ORECA President. " Without looking for outright performance, the ORECA 05 has immediately shown its speed. This confirms the competitiveness of the car from its inception.

The drivers seem to be globally satisfied with the car’s handling, which is very important at Le Mans. Meanwhile, the Alpine A450b is in the running as well. The weather remained an uncertainty, so we had to take advantage of the practice session during dry periods and not make an error in objectives. If the conditions stay variable, we’ll have to confirm all of this tomorrow, both in terms of performance and car setup. "

"The car is really very good " declared Richard Bradley, author of the provisional pole in LM P2 with the ORECA 05/KCMG. " We’ve made big progress in all areas since the Test Day and our evolution continues with each session. The car is really easy to drive. We didn’t have a specific qualifying set up, we were quick without taking risks, and I think we could go even quicker tonight. The car’s base handling was good to begin with, and we’ve improved it and now the balance is very good. Everything is really working very well. "

"Free practice went well, but the qualifying session was a bit more complicated for us " explains Xavier Combet, Director of Thiriet by TDS Racing. " We have some traffic on our fast laps and we need to improve our car’s settings. We can still go further and we still need to make progress on a few points before we have a car that is easier to drive in the race. We’re getting there little by little. In general, the result of tonight is good but we know there is still a lot to be done to be quicker and more comfortable. The potential is there. "

In LM P1, it’s worth noting that the fastest of the two REBELLION R-One entries, designed and built by ORECA, finished the session with the ninth time, improving on its 2014 performance by nearly three full seconds.